Martynas Mažvydas National Library of Lithuania invites you to attend the exhibition of paintings by Nijolė Dirvianskytė (born 1944), a painter, folk artist and one of Lithuania’s most prominent representatives of naïve painting.

The artist began her career as an independent painter at the age of 36. In her own words, she was inspired by her mother, folk artist Jadvyga Dirvianskienė whose hobby of creating coloured pencil drawings and decorative crochet and knit pieces made an impact on Nijolė as a child. Ms. Dirvianskytė improved her skills under the guidance of painter Rimas Zigmas Bičiūnas and graphic designer Vladimiras Nesterenko at Paletė art studio in Vilnius.

The motifs depicted in Ms. Dirvianskytė’s works range from the episodes of her career as a doctor of natural sciences to the moments of everyday life or memories of the nine years of her childhood in Siberian exile: winter landscapes, folklore elements, episodes from her personal life as well as portraits of the loved ones. Although in Lithuania, naïve art is often associated with the conservative painting tradition, Ms. Dirvianskytė’s visionary works conveying a cheerful mood transcends the genre limitations. They combine Lithuanian traditions and her experience as a professional chemist and the laboratory environment, the motives of birds or animals of fantastic proportions, blooming trees, flower compositions, big city landscape elements and travel experiences.

In Ms. Dirvianskytė’s own words, her career as a chemist was just as creative as the art of painting, and the experience she acquired at a laboratory allowed her to see painting through the eyes of a chemist without making big distinction between laboratory flasks and paint tubes. She spent almost all of her career working at the laboratory of the Academy of Sciences where she experimented with biologically active substances in an attempt to find potentially therapeutic compounds for the manufacture of medicinal products. Her works rooted in the Impressionist tradition show the same proclivity for experimentation: the paintings feature cheerful, bright and vibrant colours, expressive brushwork, erroneous perspective characteristic of naïve art, and childlike world-view.

Since the beginning of her career as an artist, she has been an active participant of various exhibitions in Lithuania and beyond. In 2005, Ms. Dirvianskytė was granted the status of an art creator, and in 2015, she became the winner of Monika Bičiūnaitė Prize (first place).  Her works have been acquired by various museums, including the MO Modern Art Museum in Vilnius, as well as private collectors.

Naïve art which gained popularity in the early twentieth century has never lost its relevance in foreign art scenes. Naïve art, which rejects academic forms of expression and is often practised by amateur painters, is frequently featured at international art biennials (e. g.  Venice biennial 2013 entitled Il Palazzo Enciclopedico curated by Massimiliano Gioni) and is included in the programmes of international art centres (e. g. Tate Museum in the United Kingdom). Naïve art works are kept in special institutions designated for this purpose. Among the internationally acclaimed representatives of this genre are French artist Henri Rousseau (1844–1910) and Georgian painter Niko Pirosmani (1862–1918).

Nijolė Dirvianskytė’s exhibition entitled “Naïve Art – Full of Life” invites visitors to explore this genre without any advance assumptions and offers a glimpse into her cheerful artistic world.  The “Naïve Art – Full of Life” exhibition held at the National Library’s Exhibition Space will feature Ms. Dirvianskytė’s works after more than three decades from their first public display in 1986 alongside the works of her mother Jadvyga Dirvianskienė. 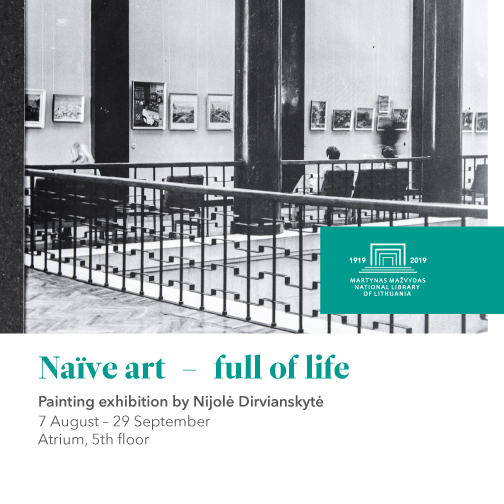