Paulina Mongirdaitė (Pauline Mongird, 1865–1924) was born in the county of Raseiniai to Mečislovas and Sofija Mongirdas who belonged to the nobility. In her adolescent years she attended Mrs. Czarnocka’s Boarding School in Warsaw. She later took private photography classes in the same city. In about 1892, she set up a photopavilion in Palanga. It was located in the residential estate of the Mongirdas family in the present-day Vytautas Street. While this photo atelier was the first facility of this kind in the seaside resort, Mongirdaitė did not confine herself to studio photography. She documented the natural settings, landscapes and architecture of Kretinga and Palanga, captured the leisure activities and daily life of the town residents and holidaymakers as well as the Count Tiškevičius (Tyszkiewicz) family. After she moved to Palanga in 1885, she witnessed the urban development of the resort town including the construction of the Tiškevičius Palace, the adaptation of the seaside to the needs of holidaymakers and the growth of the urban infrastructure. Being actively involved in the public life, Mongirdaitė raised funds for the construction of the church of Palanga. She was one of the pioneers of postcard publishing in Lithuania and published photograph collections (albums). She received a silver medal for her photography work in 1911 in Lviv. She was interested in commercial photography (her postcards were sent to Poland, Russian and foreign countries; a large number of her photographs were used in the advertising publications of Palanga of that period), photojournalism and diary photography. Therefore, Mongirdaite captured historically important events, objects and individuals as well as her immediate surroundings and relatives. It is only logical that these genres are intertwined in her works. An example of this is one of the last photographs that she took of Countess Sofija Tiškevičienė (1916), which is displayed in the exhibition and which shows countess sitting at a desk in her room. What makes the photograph intimate is how close the subject is to the camera, her natural pose, and the unexpected composition. The centre of the photograph features sunlight coming through the window, casting a glow on the subject’s face. Among the people captured in Mongirdaitė’s postcards were also clients who ordered personal photoshoots. The Chief of Police of Palanga, Nikolajus Nikitinskis, was one of such clients. He was photographed by Mongirdaitė in various locations in Palanga, and this photoshoot was part of her collection of forty photographs (1905–1907). Mongirdaitė published one of the photographs from this series of photos as a separate postcard (1907). The silhouette of the man seen in the distance on the Bridge of Palanga was that of the afore-mentioned gendarme dressed in a long cloak.

Museum scholar and historian Jolanta Klietkutė in her monograph titled First Seaside Photographers: Paulina Mongirdaitė and Ignas Stropus (2015) wrote that both the Nikitinskis’s collection and the album Kretynga (1890) compiled by Mongirdaitė feature photographer’s “coherent attempts to take the observer for a walk through the town” rather than random images. This also describes the principle behind this exhibition: rather than choosing a retrospective and synoptic look at Mongirdaitė’s work, attempts were made to reveal Mongirdaitė’s attentive relationship with the environment she photographed and a combination of reportage photography and fine-art photography characteristic of her work. The exhibition explores these characteristic features seen in Mongirdaitė’s photographs as elements that determine the openness and enduring value of her photos. 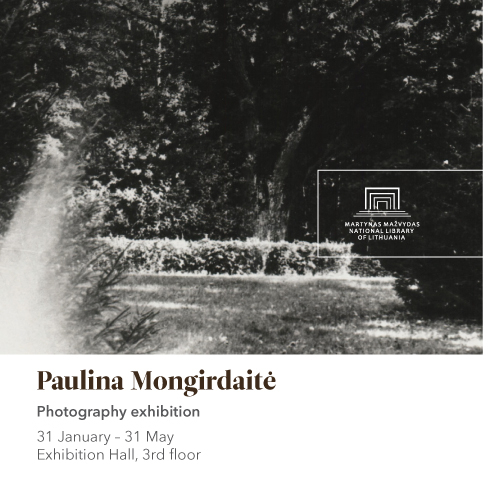