This exhibition borrows its title from the name of a sequence of works by the American artist Barbara Kasten. Created in the early 80s, Kasten’s “Construct NYC” is a series of photographs depicting different small-scale architectural environments carefully arranged in Kasten’s studio. These “stage-sets” consist of combinations of geometric figures made from industrial materials, such as fiberglass, plaster, Perspex and mirrors, as well as neoclassical sculptural elements – forms reminiscent of those found in the skyscrapers surrounding Kasten’s studio in Chicago. Created by using Hollywood lighting techniques, the colorful photographs seem to document the tension between our presumptions about reality and the artist’s management of physical materials and their intrinsic qualities – a tension exposed by the precision of camera angles.

Correspondingly, this exhibition of photography at the Martynas Mažvydas National Library of Lithuania invites its visitors to experience a variety of architectural works as contingent forms that inevitably mutate in time. Architecture is here considered both as a process of mental activity and as a political practice, a form of communication which is seen leaking and stretching in different directions. Its plasticity depends on many factors, including the collective imagination of the state and its limits, the inner dynamics of cities and the processes of the Earth.

According to the Japanese architect Itsuko Hasegawa, yet another artist in the show, perhaps a city can be described as being inside yuragi – a Japanese term for fluctuation, which, if used metaphorically, refers to state of a constant flux, vacillation, and vagueness, in which it is not possible to tell where one is heading. In this case, the buildings are destined to remain in “a forever unfinished state”, together with the environment surrounding them. Describing her take on architecture, Hasegawa underlines the importance of continuation, a direct relationship between living environment, enduring qualities within local areas and the nature or the weather. Her reference points include a Japanese curtain called manmaku, which is spread during events when performing arts are staged, or sunshades on beaches during the summer, which are put away with the arrival of autumn, restoring the “beautiful lines of the beach again”. Hasegawa’s reference to the situation of fluctuation can be seen as a guide to this exhibition, which asks its visitors to reject the stability of any solid ground, any permanent understanding of scale or functionality as such, as the different architectural structures and forms on show exceed each other before falling apart. The proportions of various architectural environments seen in the exhibition range from those of the props in Kasten’s studio installations to those of the utilitarian architectural forms in the photography of Ulrich Wüst. Wüst’s images of a no man’s land depict the cityscapes in the socialist state of East Germany, highlighting a historical moment in which the functionality of buildings exceeded their applicability to human beings.

Parallel to Wüst’s alienating spaces, visitors to the exhibition are also greeted with seductive views of the Pacific Ocean as it was seen through the broken windows of abandoned lifeguard quarters on a Los Angeles beach. Created by the American artist John Divola in the 70s, Zuma Series opens the realm of the imaginary while at the same time questioning art’s attempts to represent reality. In Divola’s pictures the walls of abandoned houses are sprayed with abstract graffiti by the artist himself and feel trippy, while the ocean views through the windows are put in contrast with the mess inside. In Zuma series the real is always and inevitably intervened with the desired and, therefore, the banal.

An interchange between the desired and the mundane is also present in the exhibition space of “Construct NYC”. Held at the National Library of Lithuania, the show becomes a comment on the architectural renovation of the library, in which the historical past was brought into proximity with the traces of a desirable future. In 2016, with the full-scale reconstruction of the building, its Stalinist neoclassical architecture and interior, which dates back to the 1960s, acquired a minimalist look of the kind associated with Scandinavian design. Since then, the coherence of the building has been its representation of not only the political realities of the country, but also the limits of its political phantasies.

“Three Places, for Marguerite Duras”, a series of Wei-Li Yeh‘s early work, invites viewers to experience phantasies in their materiality, as well as individual bodies in their relative obscurity. Yeh photographed the abandoned house close to his residence over 4 years of time from the same angle, reorganizing and restaging the space as if it was a subject of memory. The work pays homage to one of his favorite writers and references Dura‘s ‚“The Atlantic Man” – a short story about the pain and persistence of memory, as well as the act and meaning of „writing“ itself. The bright picture in the end of the series, which features a man at the dilapidated apartment close to a fire source, is one of the few works in this exhibition in which a human figure appears — and as much as the figure is real, its presence here reads like fiction.

The boundaries of fictitious worlds are also tested in the selection of photos by classically trained Lithuanian photographers Marijonas Baranauskas and Romualdas Rakauskas. In the exhibition, their images can be found in the photo album “Soviet Lithuania” (1976), which was published as a part of a series of books that served the purposes of Soviet propaganda and were intended to showcase the ideal lifestyle and the triumph of modernization in Lithuania during Soviet times. Nevertheless, because of their abstract poetry, some of the photos in the album, including the ones by Baranauskas and Rakauskas, offer more silence than slogans.

The metaphorical use of architecture in the exhibition is connected to the “will to architecture” – a term coined by the Japanese philosopher Kojin Karatani, that in his view defines a foundation of Western thought as it has developed since Plato. To Karatani, the continuous mental processes of construction in Western metaphysics can be seen as attempts to capture and realize the ideal, and, therefore, the impossible. Paradoxically, all this striving to build solid edifices of knowledge – the foundation of the “grand narrative of modernism”, as it has been discussed by Karatani – could not possibly take place without the void as its actual foundation. Besides, in the times of increasing environmental crisis, the usage of this metaphor, as well as a general obsession with the human point of view, exposes its darker side.

The works in “Construct NYC” invite us to reflect on this continuous “will to architecture” and on the proximity of the void as the condition of this irresistible urge. They remind us that it is the impossibility of the ideal that keeps buildings always under construction, “destined to remain in a forever unfinished state,” and therefore open to the myriad combinations yet to come. 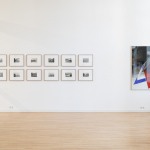 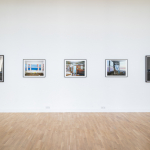 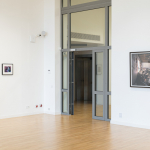 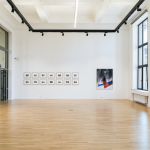 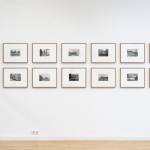 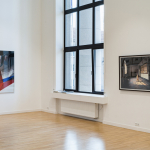 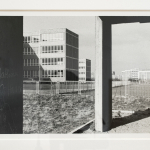 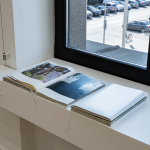 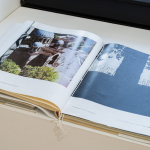 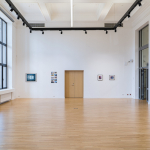 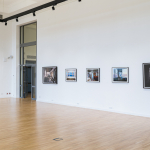 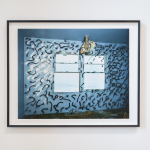 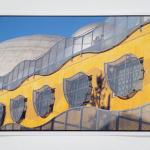 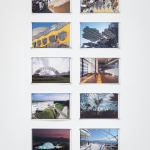 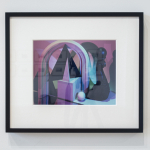 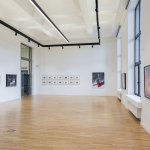 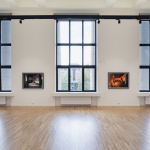 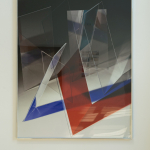