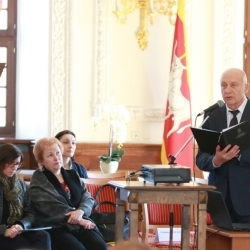 The 160-th birth anniversary of the first director of the National Library of Lithuania (at that time – Vilnius Public Library), Professor Eduardas Volteris (1856-1941), was commemorated at the international conference in Kaunas on May 5, 2016. The conference also marks the beginning of the events celebrating the Library's 100-year anniversary in 2017.

The venue, Kauns Town Hall, which hosts Kaunas City Museum, was chosen not accidentally. Prof. Volteris was one of Museum’s directors. He was also one of the initiators to establish the Lithuanian University (since 1930 – Vytautas Magnus University) and its professor.

Professor’s wide horizon and his relentless work in such fields as bibliography, archeology, Slavic and Baltic culture, folklore, ethnography, and philology, spreading over several countries – Latvia, Russia and Lithuania, was reflected in the presentations of the participants. The current director of the National Library of Lithuania, prof. Renaldas Gudauskas, noted that prof. Volteris was destined to become one of the pioneers of Lithuanian life. Among other achievements, he was the director of the public library in Vilnius, later the director of Central State Bookstore (Library) in Kaunas, the head of the Humanities Department of Higher Courses and of the Department of Archaeology at the Lithuanian University.

The lecturer of Vilnius University, Dr. Aurelius Gieda, talked about prof. Volteris and his wife's hospitality in St. Petersburg. Many Lithuanian students, including poet Pranas Vaičaitis, his fiancée Julia Pranaitytė, linguist Kazimieras Būga and diplomat and politician Augustinas Voldemaras, who studied in the city at that time, found refuge at their home.

Dr. Austė Nakienė of the Institute of Lithuanian Literature and Folklore discussed the Lithuanian folk music collection gathered by prof. Volteris in 1908-1909. The professor at the Institute of Lithuanian Language, Danguolė Mikulėnienė, emphasized the role of Volteris, as one of initiators to record and research Lithuanian dialects, and his huge impact on other linguists working in the field at that time. Her insights were supplemented and broadened by the guest from Latvia, prof. Lydia Leikuma of the University of Latvia, who spoke about Volteris and the earliest Latgalian texts.

Dr. Vilma Akmenytė-Ruzgienė talked about one of the most active organizations operating in prewar Lithuania, the Lithuanian-Latvian Unity Society, which one of its founders and presidents was prof. Volteris. In his presentation, Robertas Šimkus from Klaipėda University raised a hypothetical question: To what nation, Lithuanians or Latvians, does Volteris’ belong? Dr. Modestas Kuodys from VMU Kaunas History Center discussed prof. Volteris’ academic activities and life at VMU.

Assoc. dr. Jolanta Mažylė of Vilnius University highlighted professor's contribution in popularizing science, in particular, his historical publications in a cultural, literary and art magazine Naujoji Romuva [The New Romuva]. The representative from the Communication Center “Language. Book. Creativity” Lionė Lapinskienė discussed the relationship between a Lithuanian linguist Petras Būtėnas and his teacher Professor Volteris and the results of their cooperation.

The conference was concluded by the senior researcher of the National Library of Lithuania, Dr. Giedrė Milerytė-Japertienė, who presented the paper dedicated to Professor’s image and his appreciation in Lithuanian press.

At the conference, the participants expressed a thought that not everything has been done in researching a very rich heritage of prof. Volteris, spread over all the cities he used to live: Riga, Moscow, St. Petersburg, Berlin, Leipzig, Vilnius, Tartu, Kharkov. There is no biography about this prominent person. The organizer of the conference, the National Library of Lithuania, together with its partners, Kaunas City Museum and Vytautas Magnus University, hopes that the event will be another impulse and obligation to direct all efforts to continue researching and exploring the work left to us by the Professor Volteris.

More photos from the conference can be found here ›.

The National Library of Lithuania invites you to visit a virtual exhibition “Eduardas Volteris. His Life in Documents” (in Lithuanian). 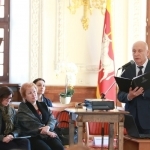 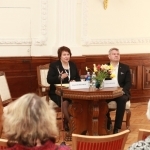 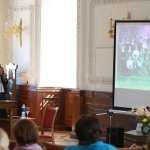 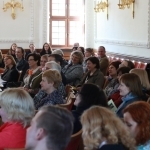