27 July: A lecture by David G. Roskies: Litvaks in love

A Litvak is both a real individual and a stereotype. True Litvaks make stuffed fish (gefilte) with pepper but not sugar, and they speak in a specific Yiddish dialect. However, they are also known for their intellectual, rational and ascetic tendencies as well as other elitist characteristics that might make them incredibly boring people to spend time with. Some Jews even believed that Litvaks were tseylem-kep, i.e., that they were hiding a crucifix in their heads.

Descended from two Litvak families, David D. Roskies, the renowned American historian of Jewish culture and scholar of Yiddish literature, has decided to challenge these national stereotypes and dispel them. We would like to invite you to a lecture in which Professor D. G. Roskies will use stories from his own personal experience, various songs and his many years of research in the field of Jewish culture in Eastern Europe to paint a portrait of the Litvak, recognised the world over as a romantic.  The professor will reveal that Litvaks wrote the very first modern Jewish love stories in Hebrew and Jewish, that they loved science like no one else and overflowed with a sincere love for the Lithuanian landscape. This legacy of love was so strong that it even survived when the Litvak population was almost completely annihilated or scattered across the entire globe.

This event was organised by the Judaica Research Centre of the Martynas Mažvydas National Library of Lithuania as part of the 2017–2018 project Improving knowledge of Jewish cultural heritage: a series of academic lectures.

The lecture will take place in English. Come and listen to these interesting, unexpected and, most importantly, true stories. 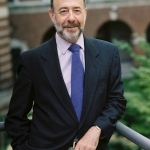