How knowledgeable are you about Israeli cinema? Many of us would probably blush upon hearing this question. Based on your general knowledge, perhaps you would guess that these are films about the history of Israel, Christianity, or Arab-Israeli relations. Hardly anyone, however, could mention specific films, their directors or cast members. Is it because we are two distant neighbours in terms of culture, history and geography? It is about time we got to know each other a little better.

We kindly invite you to the evening Israeli film screenings starting at the end of July and running each Wednesday up until the end of August. The evening film sessions will be hosted by the photographer Giedrius Jokubauskis.

Movies will be shown in original language with English subtitles.

Nominated for the 2010 Foreign Language Oscar, Ajami offers a look at the religious and ethnic fault lines dividing Israeli society. The fact that the co-directors themselves represent two distinct lines, S. Copti being a Palestinian, and Y. Shani an Israeli, adds further intrigue to the film. The film is set in Ajami, a neighbourhood of Jaffa (part of Tel Aviv) known for being plagued by crime and unemployment. The film revolves around the streets of Jaffa, gangsters, policemen and drug dealers that become part of a wider religious conflict. The film also incorporates the Romeo-and-Juliet element in its plot.

Ajami is one of those rare Israeli films that, instead of exploring the coexistence between Israel’s various ethnic and religious groups, it delves into the dark side of tribalism and sectarianism. Jews and Arabs, Christians and Muslims, rich and poor, peasants and city residents men and women, young and elderly – all of them are victims of a divided world.

The main topics explored are losses, tragedies and violence caused by social polarization. The plot focuses on a series of unfortunate events. A man is gunned down in the street. An innocent man is then killed in retaliation for this murder in a case of mistaken identity. The two deaths lead to further revenge, and more families get involved in these plans. Although no substantial evidence can be provided, both parties are convinced they are in the right.

Packed with suspense, action, adrenaline and dramatic twists, Ajami is a fictional story only in part as the majority of the cast are non-professional actors, i. e. real-life Jaffa residents. It may not be an easy film to watch, but it is certainly an amazing one thanks to its thought-provoking message and the all-round talents of the creative team.

Although the film's title is ‘The Syrian Bride’, its scope far exceeds the protagonist Mona’s story. In the Druze village in Golan Heights on the Israeli-Sirian border, the Druze bride Mona is about to marry an actor from Damascus. They have never met each other because there is no official border crossing between Syria and Israel after the 1967 war. When Mona moves to Syria after her wedding, she will never be allowed to return to her parents’ home on the Israeli side of the border. Thus her wedding also serves as an occasion to bid farewell to her family. Mona is the heart of her family. How will this separation affect her family members?

This sensitive film combines elements of drama, comedy and tragicomedy. The director deals with such complex topics as paternalism, feminism, Israeli occupation policy, and an ongoing Middle-East conflict, touching upon these topics in a masterly manner reminiscent of the early works by Pedro Almodovar. The film offers a captivating glimpse into the protagonists’ lives, and while the plot at times approaches soap opera, its dramatic plot twists and impressive camera work by a talented cinematographer turn this cinematic experience into a story about personal decisions made in a complicated political context that impact the lives of everyone involved.

The film ‘Orientied’ explores what it means to be a gay Arab living in Israel and challenges all stereotypical views about this Middle East country. It follows three gay Arab men living in Tel Aviv. Their perspectives are revealed in the context of the 2014 Israeli–Gaza conflict. This feature documentary offers a glimpse into the struggles of Israeli Arabs from a totally different angle. It is structured around their mutual conversations as well as their discussions with their families and colleagues, coming-out stories and related challenges.

Their conversations reveal the subtle portraits of the three protagonists and show extremely sensitive challenges and dilemmas that each of them personally faces: what happens when an Arab and a Jew enter into a relationship, what life is like as Palestinian, as an Israeli Arab or as someone living under occupation. ‘Oriented’ is a powerful film about the daily struggles faced by those who want to be their authentic selves in Israeli.

According to Anthony Oliver Scott from ‘The New York Times’: ‘Waltz with Bashir’ is a memoir, a history lesson, a combat picture, a piece of investigative journalism and an altogether amazing film.’

It is an unsettling animated film which attempts to recreate the circumstances and reasons behind the massacre of thousands of innocent civilians. There were people who could have prevented the killings but they did nothing. Were they uninformed? Couldn’t they anticipate what was coming? The animated film ends with the actual footage of the massacre at the Sabra and Shatila refugee camps in Beirut.

The Sabra and Shatila massacre took place during the 1982 Israeli invasion of Lebanon. The victims of the massacre were Palestinian refugee camp residents. It is believed that Lebanese Christian militia was responsible for the bloodshed; meanwhile the Israeli forces, which controlled the area in name only, witnessed the massacres but did nothing to stop them. The perpetrators were never officially identified. How much blame falls on the Israeli military forces?

The film is based on the director A. Folman’s real-life experiences as a soldier in the Israeli army in 1982. While creating this film, he attempted to come to terms with his own role and experiences in Lebanon. Visually dazzling, ‘Waltz with Bashir’ is a powerful animated feature that addresses fundamental moral issues.

Nominated for the 2012 Foreign Language Oscar, Footnote is a tragicomic story dealing with the rivalry between a father and a son both Talmud scholars who teach at the Hebrew University of Jerusalem.

The film in a way may be seen as a Talmud story: The Israel Prize (the most prestigious national award in Israeli) intended for the son, is mistakenly awarded to his father. The revelation of this situation makes the father-son dynamic unfold. They are faced with an almost Talmudic question as to what is more important: the father's duty to his son or the son’s duty to his father? Or maybe the truth is what matters the most and if the prize should be awarded to the actual winner? To what extent will the moral and ethical Talmudic studies help the father and the son in working out their own relationship?

This intellectually stimulating and funny film with stunning cinematography has received high critical acclaim in Israel.

Ushpizin opens a window into the secluded ultra-Orthodox world of Israel. It is a warm comedy-drama about a childless poor Hasidic couple who live in Mea Shearim, the most conservative traditional neighbourhood in Jerusalem. Husband Moshe studies in yeshiva all day, and his wife Mali tries to make ends meet as at at-home businesswoman. It is just before the festival of Sukkot, and Moshe and Mali are down on their luck. Their prayers are answered when an unexpected gift of money arrives on their doorstep which helps them with the preparations for the festival. In another prayer Moshe asks for guests, and two criminals from Moshe’s past arrive unexpectedly. A rather unusual Sukkot celebration ensues...

Unlike many other films about ultra-Orthodox Jews, Ushpizin offers an incredibly authentic depiction of the Hasidic life. Everyone is welcome to come and see this hilarious story about an authentic Hasidic family life celebrating simplicity, love, trust in God and sincerity. 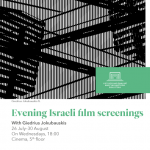