9 August: Prof. Dov-Ber Kerler’s lecture “Yiddish: A Language in Contact Within and Without”

Language is not just a tool of communication. It is an extremely interesting multi-layered structure encoding the experiences of the nation who fosters and develops it – its history, culture, and contacts with foreigners and their traces. A “pure” language untouched by other languages is an exception to the rule. In fact, there are virtually no pure languages in Europe. A quick glance at the dictionary can easily reveal the cross influences between different languages. For example, you can come across French words that have similar forms in the German language, and vice versa.

Noticing and comprehending foreign elements of a given language is mostly the domain of philologists and linguists. In Yiddish, however, the majority of its speakers feel as if they are experts on the different components that make up its lexicon, morphology, and even structure. Hence the widespread perception of Yiddish as a “mixed” and impure language But what are the actual facts? We kindly invite you to a lecture by Prof. Dov-Ber Kerler about the Yiddish language and the ongoing dynamic interaction between the linguistic “within” and the sociocultural “without”. The lecture will be held in English.

Yiddish was born out of contact between languages and cultures. It contains elements from its prehistoric past which are fused with more recent ones into a coherent and well-integrated system. The shift of Ashkenazi Jews  (Jews who lived in Ashkenaz, the Medieval Hebrew name for Germany) to a Germanic-based language is the result of direct contact with the then new surroundings. It is a contact language deeply affected by Semitic speech patterns, words and meanings.

This event is organised by the Judaica Research Centre of the Martynas Mažvydas National Library of Lithuania as part of the 2017–2018 project Improving knowledge of Jewish cultural heritage: a series of academic lectures.

Do not miss the opportunity to learn more about the world and be sure to attend this lecture about the Yiddish language that expresses, reflects and opens window into the ancient lifestyle of Ashkenazi Jews. 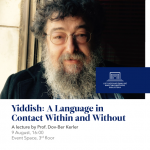