The twin cataclysms of 20th Century history—the Holocaust and 75 years of Soviet rule—resulted not simply in the extermination of European Jewry, but also in the erasure of European Jewish culture and a fundamental disruption of the narrative of national survival.

In Ansky’s The Dybbuk (1916), Reb Azriel, foreshadowing the tragedy that would follow twenty-five years later, laments that Leah’s father has come to him, seeking the exorcism of the dybbuk: “To me? To me?” he says. “How could he have come to me when the ‘me’ in me is no longer here?”

In our search for answers as to how we could take at least small steps toward making up for this damage, we invite you to a lecture “Reclaiming the Jewish Past: archives, digitization and memory” by Jonathan Brent, director of the Institute for Jewish Research (YIVO) in New York, United States, and a long-time partner of the Martynas Mažvydas National Library of Lithuania.

This lecture is about how, through the YIVO Vilna Collections Project, the reconstruction of pre-Holocaust Jewish life can help us overcome the traumatic ruptures of 20th century history. This project of the recovery of the past, through which an authentic “me” can be found, may also become a bridge to a vital Jewish future.

This event is organised by the Judaica Research Centre of the Martynas Mažvydas National Library of Lithuania as part of the 2017–2018 project Improving knowledge of Jewish cultural heritage: a series of academic lectures. 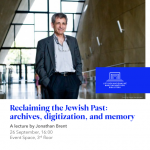