4 October – 2 November: a glimpse at the history and culture of Latin American countries

The Ministry of Foreign Affairs together with embassies of Latin American countries accredited to Lithuania and their honorary consuls, invite dwellers and guests of Vilnius to get to know more about the rich history and culture of Latin American countries. During the months of October and November different events will bring us closer to Colombia, Mexico, Uruguay, Chile and Guatemala.

17.00 in Martynas Mazvydas National Library (Conference hall, V a.) Deputy Minister of Foreign Affairs Patti Londoño Jaramillo will be giving a lecture “Colombia: Post-conflict Opportunities“. After the end of the conflict that lasted more than fifty years, Colombia faces new challenges and opportunities.

The story's emotional center is Eric, a 10-year-old boy sent to live with his impoverished handyman father in a grungy quarter of downtown Bogota. One of his more well-heeled clients is Maria Isabel, a kindly matriarch who takes pity on both Eric and his father, inviting them to stay at her family's luxurious country villa over the Christmas holiday when they would otherwise face eviction. But tensions soon begin to crackle between the rich owners and their poor guests, exposing the gap between festive pieties about Christian charity and the starker realities of the class structure.

19.00 in Vilnius tango theatre (Gedimino av. 64), we will celebrate 100 years of famous „La Cumparsita“ tango together with tango singer Nelson Pino and pianist Alvaro Hagopian.
October 12th will be the day of Chile

The movie tells the life story of Chilean folk singer, poet and artist Violeta Parra (1917-1967). Loosely based on Ángel Parra's memoirs of his mother Violeta Parra, the film offers a multi-faceted and lyrical portrayal of an influential figure in world music and complex cultural icon of Chile's history. Violeta Parra's revival of Chilean traditional music galvanized a socially and politically committed pan-Latin American folk music movement, the "nueva canción," and became a reference for other Latin American artists committed to their national legacies.

October 26th will bring us to Central America

18.00 in Martynas Mazvydas National Library we invite you to watch the movie “La Camioneta: The Journey of One American School Bus” (director Mark Kendall, 2012)

Every day dozens of decommissioned school buses leave the United States on a southward migration that carries them to Guatemala, where they are repaired, repainted, and resurrected as the brightly-colored camionetas that bring the vast majority of Guatemalans to work each day. Since 2006, nearly 1,000 camioneta drivers and fare-collectors have been murdered for either refusing or being unable to pay the extortion money demanded by local Guatemalan gangs. LA CAMIONETA follows one such bus on its transformative journey: a journey between North and South, between life and death, and through an unfolding collection of moments, people, and places that serve to quietly remind us of the interconnected worlds in which we live.

17.00 in Martynas Mazvydas National Library a photo exposition “Day of the Dead” will be opened. We invite you to get to know more about this emblematic Mexican tradition.

How one does confront approaching death of one of his/her parents? Carlos Hagerman explores this question while elaborating loving picture of his parents Doris and Oscar, a couple who has spent 40 years living and working together, and who are facing their impending retirement. Both dedicated their lives to educational projects and architecture in rural indigenous communities in Mexico. Isabel and Enedino, two indigenous professionals in the Sierra of Puebla, take the baton from their mentors and teachers. A documentary celebrates and explores the transformational process of teaching, learning and building.

The events in brief 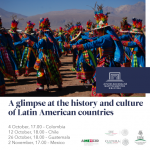 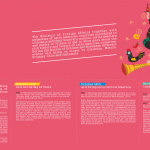