On the 17th and 18th of October, Prof. Dr. Renaldas Gudauskas, Director General of the Martynas Mažvydas National Library of Lithuania took part in the event held in Geneva, Switzerland, dedicated to the International Print Day and the 500th anniversary of the humanist Francysk Skarina.

The event also included a discussion entitled “The Future of Libraries in the Knowledge Society”. Prof. Dr. Renaldas Gudauskas, Director General of the National Library, met with Andrius Krivas, Ambassador at the Permanent Mission of the Republic of Lithuania to the United Nations Office and other International Organizations in Geneva. The ambassador gave a presentation about its permanent mission and its activities and goals. On the 18th of October Prof. Dr. Renaldas Gudauskas had a meeting with Francesco Pisano, Director of the Library of the UN office. The meeting focused on the library’s activities and also included a display of the League of Nations documents reflecting the development of Lithuania’s statehood.

Prof. Dr. Renaldas Gudauskas also participated in the ceremony of the donation of the facsimile editions of Francysk Skarina’s books to the UN Library. The facsimiles were donated by the National Library of Belarus. Welcome address was delivered by the Director of the UN Library F. Pisano, ambassadors of Belarus, Czech Republic and Lithuania. The event was also attended by a number of other permanent representatives to the United Nations.

Prof. Dr. Renaldas Gudauskas was among the speakers at the international discussion “The Future of Libraries in the Knowledge Society” focusing on the rapidly changing information space and needs as well as the role of libraries in today’s global world. In his presentation, Mr. Gudauskas emphasized the integrated activity model of the Lithuanian National Library. The event also saw the participation of Roman Motulsky, Director of the National Library of Belarus, F. Pisano, Director of the UN Library, and Gitanjali Sah, Coordinator of the World Summit on the Information Society at International Telecommunication Union. 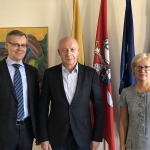 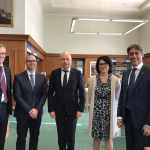 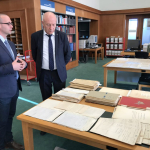 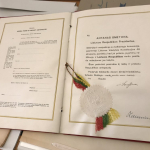 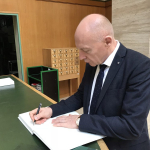 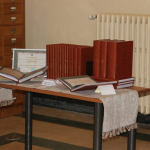 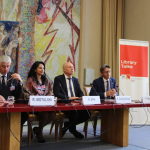 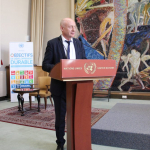 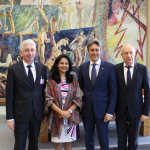