Prof. Dr. R. Gudauskas: “Our National Library has preserved one of the most important collections of Jewish documentary heritage in Lithuania and globally”

On the 17th of October The New York Times published an extensive announcement about the discovery of a trove of lost Jewish materials which was first hidden during the wartime years and stored in secret in the basement of St. George Church (the former Book Chamber).

“We are really excited that our library and its book research activities have received coverage from one of the world’s most influential newspapers; however, this did not come out of the blue. It was the result of many years of hard work and dedicated research,” said Prof. Dr. Renaldas Gudauskas. “After completing renovation of the library, we have significantly increased the scope of Judaica research activities. New documents being identified on a daily basis suggest that our National Library has preserved one of the most important collections of Jewish documentary heritage in Lithuania and globally,” pointed out the Director General.

This trove of materials which had been concealed in the storage rooms of the former Book Chamber to protect them from Nazis and Soviets comprises a collection of over one million books, manuscripts, newspapers and magazines in Lithuanian, Polish, Russian, Belarusian, Yiddish, Hebrew, German, French and other languages. It was not until 1990 that scholars could start research of this multinational and multicultural collection of Lithuanian documentary heritage. The documents were removed from the unheated, humid rooms of St. George Church and transferred to the document storage facilities specifically designed for this purpose. They were then cleaned, conserved and restored before being subjected to analysis. Research of Jewish printed materials was first started in the Book Chamber after setting up the Judaica Department.

The research of the Judaica collection resulted in the compilation of the bibliography of the Lithuanian books in Hebrew. In 1995, the National Library signed an agreement with the Library of the United States Congress and microfilmed over 200 pre-war Jewish newspapers and magazines, in this way preserving them from deterioration. These microfilms were later digitized and are now publicly accessible via the Lithuanian Cultural Heritage portal. The most important documents were presented in the exhibitions in Lithuania and Germany from the historical, book study and scholarly perspective. From 2015 onwards the National Library continues the research and digitization of the Judaica collection in collaboration with the Institute for Jewish Research (YIVO), United States. Further attempts are made to preserve this collection. In order to increase the scope of Jewish research, this year the National Library established the Judaica Research Centre having a team of four researchers.

The YIVO Vilnius project, to be implemented over the period of 2015 to 2019, aims to preserve, digitize and virtually reunite YIVO’s preware archives located in New York and Vilnius, and to digitally reconstruct Matas Strašūnas Library of Vilnius, one of the greatest prewar libraries in Europe. The project encompasses 10,000 rate or unique publications and some 1.5 million documents related to the life, society, science, religion, education, culture and arts of East European Jews. The project is implemented by the Institute for Jewish Research (YIVO), the Martynas Mažvydas National Library of Lithuania and the Lithuanian Central State Archives. Between December 2015 and September 2017, the National Library digitized 2668 books from the Judaica collection for the purpose of this project. The research process of the Judaica collection includes the identification of new documents. Based on this, the lists of documents for description, conservation and digitization will be reviewed. In addition, attempts will be made to make this unique Jewish collection of documents preserved in Lithuania accessible to the public through various ways and channels.

On the 24th of October, ten most important newly identified documents from the National Library’s Jewish documentary heritage collection will be presented to the public for the first time at the YIVO institute headquarters in New York. These will include the manuscript of the Issachar Ber Carmoly’s “A Treatise on Astronomy” published in 1751 which is valuable in two respects. This treatise had belonged to M. Strašūnas, one of the most famous East European bibliophiles of the 19th century, who bequeathed his private collection for the purpose of establishing the first public library of the Jewish community. The uncovered I. Ber Carmoly’ s treatise will contribute to the reconstruction of the M. Strašūnas collection. Researchers and public will also have a chance to see a censor’s copy of a Yiddish theatrical poem by Abraham Goldfaden from 1883, Isaac Leib Peretz’s hand-written agreement compiled in Warsaw in 1914, Vilna Jewish poet Abraham Sutzkever’s “Ten Poems” hand written in the Vilna Ghetto in 1943, and a letter by one of the most renowned Jewish historians Simon Dubnow to Zalman Reisen, written in Riga in 1934. 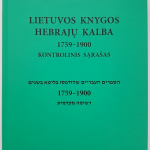 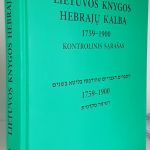