Jewish documents preserved by the National Library presented to the public

On 24 October, the New York-based YIVO Institute for Jewish Research presented a body of Jewish documents of invaluable historical significance preserved by the Martynas Mažvydas National Library of Lithuania and discovered in the basement of the St. George Church (formerly the Chamber of Books) in Vilnius, where they had been hidden during WWII. The materials were previously thought to have been destroyed during the Holocaust.

This discovery is essential for understanding Jewish history and marks a new chapter in the dramatic story of Nazi looting during the Holocaust, when the Germans sought to destroy not just the Jewish people (in Lithuania approximately 90 to 95 percent of the Jewish population was murdered) but their memory and culture as well. Containing more than 170,000 pages, this trove of materials was preserved for decades by the heroic efforts of Antanas Ulpis, a Lithuanian librarian and the director of the Chamber of Books, who saved the documents and stored them in a secret basement beneath the St. George Church, where he worked.

“It is of critical importance that we participate in this historical event and, along with the YIVO Institute, present these priceless documents to the public. The Martynas Mažvydas National Library of Lithuania contributes to fostering and preserving cultural history and collective memory. This is our mission as well as the fruit of many years of consistent work and research,” spoke Prof. Renaldas Gudauskas, director of the National Library. “Now that the reconstruction of the library is complete, we have started investing in more large-scale research in the field of Jewish studies. New documents emerge every day as a result of these efforts and we can confidently conclude that our National Library has preserved one of the most significant collections of Jewish heritage documents in Lithuania and the world,” emphasised the director.

Ten of the documents from the discovery have been presented to the public for the first time. They will be on display at New York’s Center for Jewish History from 24 October to January 2018, The opening of the exhibition was attended by Linas Linkevičius, Lithuania’s Minister of Foreign Affairs, US senator Charles Ellis Schumer, YIVO director Jonathan Brent and other honourable guests.

The new discovery is of particular note for its wealth of manuscripts, precious religious writings – in Hebrew and Yiddish – record books of shuls and yeshivas; mystical writings, and more. Additionally, the collection contains post-war and wartime materials, such as poetry written while in the Vilna Ghetto by Abraham Sutzkever. All other materials that have previously been found from this time period in Eastern Europe precede the outbreak of WWII.

Ten of the most important newly discovered documents from the National Library’s collection of Jewish heritage manuscripts were presented for the first time at the headquarters of the YIVO Institute in New York. Among them is the handwritten Astronomical Manuscript by Issachar Ber Carmoly, published in 1751. The manuscript belonged to Matas Strašunas, one of the most well-known nineteenth century bibliophiles in Eastern Europe, who after his death donated his personal collection to the cause of establishing the Jewish community's first public library. The academic community and the general public will also be introduced to Abraham Goldfaden’s handwritten Yiddish poem complete with a censor’s permit from 1883, a contract written by Isaac Leibusch Peretz in Warsaw in 1914, a collection of poems entitled Ten Poems by Abraham Sutzkever, a Jewish poet from Vilnius, handwritten in the Vilna ghetto in 1943, and a letter written by one of the most famous Jewish historians, Simon Dubnov, to Zalmen Reizen in Riga in 1943.

Recognising the importance of these documents both to Lithuanian cultural history and studies of global Jewish history, the National Library is committed to continuing its systematic cooperation with YIVO, so that this newly discovered and previously unknown body of historical Jewish documents is studied and digitised, its contents opened up to society at large and integrated into the cultural history of the world. 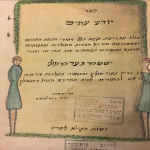 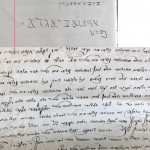