12–13 December: a series of lectures “Construction of Jewish Cultural Heritage: Past and Present”

The Judaica Research Centre of the Martynas Mažvydas National Library of Lithuania invites you to attend a series of lectures by two speakers from St. Petersburg which will explore Jewish cultural heritage and its uniqueness. This time we will approach this topic by focusing on tangible and even personal cultural heritage: pictures from a unique expedition and family relics passed down from generation to generation.

Alexander Ivanov is a researcher and lector at the “Petersburg Judaica” Centre of the European University, St Petersburg. On the 12th of December we invite you to attend his lecture entitled “Creating the Portrait of the Jewish People: Photo Archive of S. An-Sky’s expeditions (1912–1914)“.

A prominent Yiddish and Russian writer, ethnographer and revolutionary S. An-sky (real name – Shloyme Zanvl Rappoport, 1863–1920) who came to prominence for his play The Dybbuk or Between Two Worlds, headed expeditions to Jewish settlements in the western region of Imperial Russia between 1912 and 1914. During those expeditions the photographer Solomon Iudovin took around 2000 photographs. Mr. Ivanov’s lecture will shed light on this impressive archive as well as the uniqueness and enduring value of S. An-sky’s expeditions. Mr. Ivanov will also explain why  this expedition had been considered as an important contribution to the self-perception of the coming Jewish generation, how the “nation’s portrait” was created; in what way S. Iudovin’s photographs stood out from the general context of that time, what was the fate of those photographs and where they are stored. “They would not wander among the works of other nations like pale shadows” – who wrote these words? Come to Mr. Ivanov’s lecture and find out!

Dr. Alla Sokolova is a researcher at the “Petersburg Judaica” Centre of the European University, St Petersburg, and a curator of the Judaica collection of the State Museum of the History of Religion in St. Petersburg. On the 13th of December, attendees at the National Library will have the opportunity to hear Ms. Sokolova give a lecture entitled “Collection and Representation of Tangible and Intangible Heritage: Authenticity and Primary Source Communities”.

You will learn about the exhibition “Jewish Family Relics” displayed at the State Museum of the History of Religion in St. Petersburg which features items of Jewish cultural heritage passed down from generation to generation. The main objective of this exhibition is to reveal the experiences around the creation of family relics which are presented by the participants of the exhibition as the evidence of their Jewish origin, in an effort to show their Jewish identity in the secular public space. Besides providing knowledge on the family past, family relics also testify to the embodiment and immortalization of important family moments. What does this exhibition tell us? How family memory interplay with the memory of the entire community and how family memory keepers can identify with it? Ms. Sokolova will offer answers to all the key questions.

All lectures will be given in English. 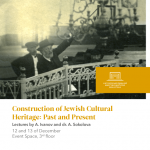