Increasing opportunities for the dissemination of the Judaica documentary heritage

On the 1st of February 2018, the National Library opened an YIVO room with a view to strengthen the cooperation with the Institute for Jewish Research (YIVO) based in New York (United States), to improve the research of the Judaica documentary heritage and to implement the YIVO Vilnius project aimed at creating a digital library preserving the historical memory of East European Jews as well as to ensure its continuity. This room will accommodate activities related to the coordination of the project tasks and focused on more efficient dissemination of the Jewish documentary heritage stored at the National Library.

From 2015 onwards, the National Library together with the Lithuanian Central State Archives and the Vrublevskiai Library of the Lithuanian Academy of Sciences is participating in the Edward Blank’s YIVO Vilna Collections Project which is aimed at digitizing the Jewish documentary heritage stored in these institutions and reuniting the Jewish documentary collections scattered across different memory preservation institutions. Also, attempts are made to introduce the wider public to rare and unique publications related to the public and cultural life of the East European Jews, their religion, education, science and art. This digital set of documents will comprise the largest collection of Yiddish-language materials in the world. These documents reflect the multidimensional relationship that the Jews of Lithuania had with the country, its nature, history and languages, and reveals the points of contact between them and their past neighbours in political and social contexts. Thus the Jewish books and documents not only present the history of Jews – the largest ethnic minority of the interwar Lithuania and Vilnius – but also its close economic, political and social ties with Lithuanian and other communities of the country. The academic goal of the project is to restore the knowledge recorded in the previously unpublished and currently still unknown documents about the unique historical and cultural phenomenon – the Eastern European Jewish community – in which the communities of Lithuania and especially Vilnius played a crucial part, and to bring these materials back into the areas of study. 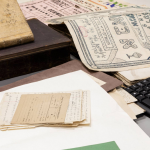