Minister of Justice of Moldova Gave Lecture at the National Library

The Minister of Justice of Moldova Prof. Dr. Alexander Tenase and the members of his delegation paid an official visit to the Martynas Mažvydas National Library of Lithuania. The Minister A. Tenase was a long-time Chairman of the Constitutional Court of Moldova and previously taught constitutional law at Moldova State University.  The Professor kindly agreed to give an open lecture to the law students of Lithuania.

Prof. Dr. A. Tenase congratulated the attendees on the 100th anniversary of Lithuania's independence and thanked them for the warm welcome “at the bright and spacious National Library” and also expressed his gratitude for long-time assistance that Lithuania provides to Moldova in implementing vital legal reforms.  The guest emphasized that this visit would also serve him as an occasion to further strengthen the existing bilateral relations between the countries.

According to the Minister, Moldova, just like Lithuania and the rest of the European Union, is learning and striving to respect European values and wants to make progress in implementing the European Union Association Agreement. A. Tenese said that the issues of particular importance for them is ensuring the independence of the judiciary, taking efficient measures against money laundering, increasing the freedom of the media and respecting human rights.

The meeting participants also discussed the bilateral relations that have been successfully developed in the field of justice in recent years.  Lithuanian experts take part in the European Union programmes and contribute to the reorganization of the area of justice taking place in Moldova and to the strengthening of constitutional law.

“We openly accept Lithuania's experience to make sure that Moldova's path toward European integration is as smooth as possible despite geopolitical challenges.  We would like to see a faster pace of reforms being implemented in our country but in pursuit of these ambitious goals we encounter both internal and external issues,” said the Minister of Justice of Moldova.

The lecture was also attended by the Lithuanian Minister of Justice Dr. Milda Vainiutė, the professors and students of the Faculty of Law at Mykolas Romeris University.  After the lecture, the Director of the National Library Prof. Dr. R. Gudauskas showed the guests the refurbished spaces of the library, gave them an overview of the activities that take place under its roof, and discussed opportunities for cooperation. 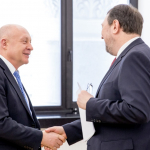 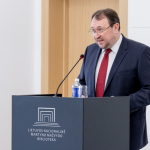 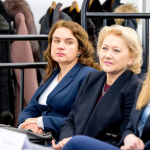 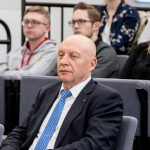 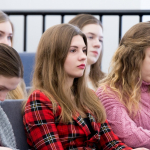 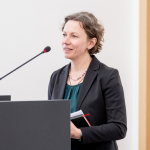 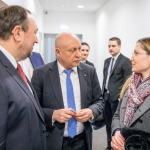 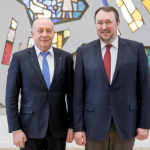