The Lithuanian Prime Minister Saulius Skvernelis, the head of the Latvian Government Māris Kučinskis and the Estonian Prime Minister Jüri Ratas were invited to inaugurate the international book exhibition which offers an overview of the book publishing processes that took place in the 20th century in Latvia, Estonia and Lithuania between the two world wars.

The event host Richardas Jonaitis invited the trumpet player Dominykas Vyšniauskas to announce the official opening of the event so that the sound of the trumpet spreads the news about the exhibition across all three Baltic states.

In his address at the opening ceremony, Prof. Dr. Gudauskas, Director General of the National Library, pointed out that the exhibition features the press works reflecting the global quality standards, the culture and press policies and publishing processes of the independent young Baltic countries in the inter-war period.  According to Prof. Dr. Gudauskas, soon after book publishing reached its heyday, it was brutally suppressed and banned by a foreign power.  “I hope that the history behind the words “TO BE BANNED” never repeats itself and that these words are replaced with the word “OPEN”,” said the host of the event.

In his address, the Lithuanian Prime Minister Saulius Skvernelis said the nation’s strength rests on the extent to which the nation cherishes and fosters its spoken and written language as well as literature.  “Keeping the national language alive and publishing books in the native language is vital for the continued existence of the nation and its power of statehood. Thank you all for the opportunity to get an insight into what made us stronger in the inter-war period.  It is a source of pride to all of us. Let us celebrate together the 100th anniversary of the restoration of independence of Latvia, Lithuania, and Estonia,” said the Lithuanian Prime Minister.

The Estonian Prime Minister Jüri Ratas, while giving his address speech, expressed his gratitude for the honour to participate in the event.  In his words, this exhibition constitutes the written history of all three Baltic countries.   Despite the many differences between the three Baltic sisters, love is a key force that unites the three nations, J. Ratas said.  “This love guided us in celebrating the centenary of the restoration of our countries’ independence.  Happy anniversary, Lithuania, happy anniversary, Latvia, and happy anniversary, Estonia!” said the Estonian Prime Minister congratulating the attendees.

According to the head of the Latvian Government Māris Kučinskis, books and reading have a special place in our hearts and are woven into our genetic make-up. “The people of my generation could only read these books in secret.  These books served as a reminder that we once were citizens of an independent state.  It is about time for us, Baltic states celebrating their 100th anniversary of independence, to think what our countries should look like and, most importantly, to understand that everything is in our hands,” said M. Kučinskis at the end of his speech.

After the opening ceremony, the guests were invited to look around the exhibition titled “To Be Banned: Baltic Book Publishing and Design 1918–1940” which is devoted to commemorate the 100th anniversary of the restoration of independence of each of the three Baltic states.  The exhibition offers an insight into a comparatively short period of independence which created opportunities for the development of book publishing.

The exhibition will be presented to the general public at 6:00 p.m. Visitors will also have an opportunity to meet with the authors of the exhibition. 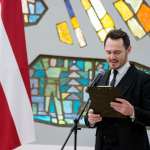 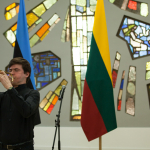 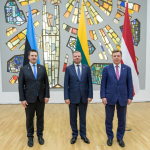 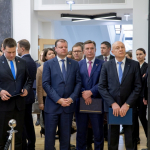 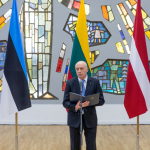 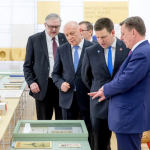 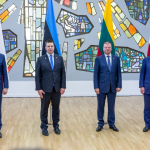 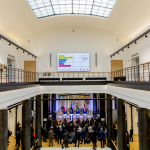