The Ministry of Culture allocated EUR 10,000 to the Martynas Mažvydas National Library of Lithuania for continued promotion of access to the digital content of the YIVO Vilnius project.

Implementing the first phase of the project in 2017, a virtual exhibition People and Books of the Strashun Library was launched, academic lectures with well-known foreign speakers were organised, representation materials were developed and equipment was purchased for visual rendering of the YIVO Institute for Jewish Research (YIVO) archive stored in the National Library.

A large collection of Judaica prints and documents stored in the National Library is an integral part of the Lithuanian heritage. It represents an active and rich public and cultural life of the traditional Lithuanian Jewish community until the Holocaust and its tragic fate during the Nazi occupation. Well known in Lithuania and abroad, the collection is an unceasing centre of attraction for researchers and other segments of the society and is included in several UNESCO registers.

This year, in the framework of the project, an exhibition of Jewish documents discovered in the St. George's Church, which have not been presented to the Lithuanian public yet, will be prepared and put on display. The nine exhibits have only been displayed in the YIVO Institute in New York. Academic lectures will be organised this year as well. The first one is planned for 24 May in the Institute of Lithuanian Literature and Folklore. The speaker will be David Roskies, Professor of the Jewish Theological Seminary (New York) and the Hebrew University (Jerusalem) and one of the best-known scholars of the Yiddish literature. The lecture “Change a Story and You Can Change the World. Three Storytellers of Modern Yiddish Literature” will analyse the texts of three classic Yiddish authors: Mendele Moicher Sforim (born Sholem Abramovich), Moische Kulbak and Avraham Suckever.

A facsimile of the Avraham Suckever's poetry book “Ten Poems” written in the ghetto was found among YIVO documents. The Judaica Research Centre will prepare a facsimile edition of this manuscript with translation into Lithuanian and two introductory academic articles.

The YIVO Vilnius collection is available in English in the YIVO website and the materials will be translated into Lithuanian in the framework of this project.

The YIVO Vilnius project is part of the international digitisation project launched three years ago. It is one of the largest digitisation projects dedicated to preservation and digitisation of the remaining Jewish documentary heritage. It is important for researchers who will be provided with new opportunities and access as well as for the Lithuanian people. These documents represent the multi-faceted relationship of the Lithuanian Jews with the country, its nature, history, language and people. They tell us how the Jews lived, where they came from, how they raised and educated their children, how they studied and created art, literature, language and music. Even more so they reveal the relationship between the Jews and their non-Jewish neighbours, how they understood their place in the political and social context. It is not part of the Jewish history alone – the Lithuanian population was closely related to Jews, the largest and most numerous national minority, by economic, political and social ties, the Jewish culture was intertwined with the Lithuanian culture.

During the project implemented by the YIVO Institute for Jewish Research (New York) together with the National Library, Lithuanian Central State Archives and the Wroblewski Library, the surviving documents and prints of the Lithuanian Jewish community are being identified, restored, digitised and presented to the interested audience. The academic aim of the project is to restore and return to the academic circulation the information recorded in the unpublished and not yet known documents about an exceptional historical and cultural phenomenon – the Eastern European Jewish community, where the communities of Lithuania and Vilnius played a key role. The plan of the project is to preserve, digitise and consolidate the pre-war YIVO archives of New York and Vilnius in a special web portal and to restore the Strashun Library of Vilnius, one of the largest pre-war libraries in Europe, in virtual form. This will ensure the survival of these unique documents and their accessibility to the public. The scope of the project is 10,000 rare and unique publications and 1.5 million documents. Its overall duration is 7 years. In the first two years of implementing the project, the National Library presented around 300,000 scanned images from over 2,000 books. 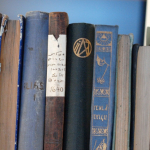 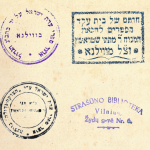 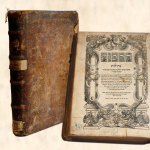 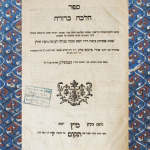 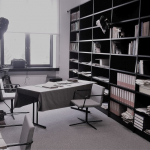