The Locarno Festival, one of the most famous film festivals in the world, was held in Switzerland between 1–11 August 2018. The following Lithuanian films were included in the festival programme: Acid Forest (Rūgštus miškas), a documentary by director Rugilė Barzdžiukaitė, Caucasus (Kaukazas) by director Laurynas Bareiša, and Trote (Risčia, director Xacio Baño), a Spain-Lithuania production.  The event also included a presentation of other projects representing Lithuanian culture. A well-known Swiss gallery owner and art collector Arminio Sciolli organized an event entitled “10 Days in Lithuania” in Locarno at the beginning of August. It was dedicated to the 100th anniversary of the restoration of Lithuania’s independence.

Il Rivellino gallery hosted an exhibition featuring books on the history, language, literature and art of our country as well as on Lithuania’s cultural and historical links to Switzerland and the canton of Ticino, the Italian-speaking area of Switzerland.  The Director General of the National Library Prof. Dr. Renaldas Gudauskas and the Director of the Documentary Heritage Research Department Jolanta Budriūnienė gave introductory speeches at the opening of the book exhibition.  HoPro, a Vilnius-based team of hologram creators, in cooperation with the National Library, presented smart picture frames and traditional holograms they had developed around the topic of old Lithuanian writings and the Rivellino castle which accommodates the gallery.

The exhibition also featured photographs by the Lithuanian photography pioneer Antantas Sutkus who was at the event in person to present his work.  A trailer of Midsummer Night's Conversations in Lithuania, a documentary currently being created by the Swiss director M. Tognola about the work of A. Sutkus and the world-famous director Peter Greenaway was shown at the Muralto movie theatre.

The gallery also displayed the works by the Lithuanian artists Jurga Barilaitė and Irma Leščinskaitė assisted by Zita Tallat-Kelpšaitė, the editor-in-chief of the magazine Jūra, More, Sea. The artists also took part in creative activities at the improvised workshops. The exhibit that attracted a great deal of attention was the work by the famous installation artist Jolita Vaitkutė featuring a photograph of the signatories of the Act of Independence of Lithuania created from Lithuanian soil.

The Lithuanian delegation was invited to the presidential reception held on the occasion of the festival. During the reception, the president of Switzerland Alain Berset congratulated the members of the Lithuanian delegation and thanked them for the beautiful initiative of our country to bring a comprehensive presentation of our culture to Switzerland.

The events dedicated to the 100th anniversary of the restored state of Lithuania saw the participation of the Swiss Minister of Culture Isabelle Chassot who took part in the opening ceremony, the Head of the canton of Ticino Claudio Zali, mayors of Lugano, Locarno and Ascona, one of the famous Swiss architects Mario Botta, director P. Greenaway and many prominent representatives of the art world.

Swiss gallery owner and art collector A. Sciolli and Romas Jankauskas, the Commissioner General of Lithuanian pavilions in global exhibitions and EXPO Group Chief Advisor of the Ministry of Environment, met last summer at the EXPO exhibition in Astana. A. Sciolli contributed to this project that represents Lithuania in Locarno and also expects to implement numerous other future projects related to the dissemination of our country’s culture in foreign countries. 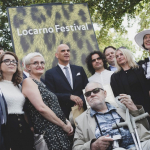 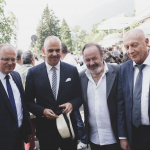 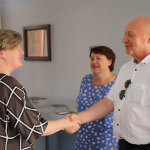 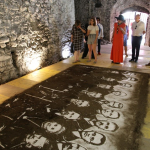 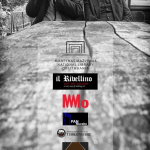