12 September: The Athenian Acropolis. The process of the monuments’ protection

The Martynas Mažvydas National Library of Lithuania invites you to participate in the lecture hosted by Vasiliki Eleftheriou, Architect Engineer, Director of the Acropolis Restoration Service, Hellenic Ministry of Culture & Sports.The lecture will present the architecture and the construction of the monuments, especially of the Parthenon, the damages and their causes, and will focus on the principles, the methodology and the results of the current restoration.

The Acropolis of Athens, a universal symbol of Democracy, is an iconic World Heritage Site monumental ensemble that embeds the values of Western civilization. After 2500 years, the monuments have suffered significant damage, due to either natural causes (i.e. earthquakes) or to human activities (i.e. fires, bombardments or shortfalls of earlier restorations). The Modern Greek State, immediately after its establishment in the 19th century, attended to their protection. Yet, only during the last 40 years the conservation of the monuments has become a part of an integrated protection framework, combining research, in-depth documentation and implementation on the basis of an approved methodology, in accordance with the ethics deriving from international conventions. A special Service of the Hellenic Ministry of Culture and Sports has undertaken the conservation and restoration of the Acropolis monuments under the supervision of an interdisciplinary scientific Committee.

Greece's Ambassador Dr. Vassiliki Dicopoulou will be among the attendees of the lecture. 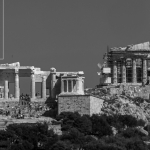