The representatives of diplomatic missions in Lithuania gathered for an event at the Martynas Mažvydas National Library of Lithuania on Wednesday evening. Upon the invitation of the Ambassador of the Hellenic Republic in Lithuania Dr. Vassiliki Dicopoulou, the library hosted the opening of the photography exhibition entitled “Records in Memory: Recalling Moments of the Propylaea Restoration” currently on display at the National Library and a lecture titled “The Acropolis of Athens. The Process of the Monuments’ Protection” by Vasiliki Eleftheriou, Architect, Engineer, and Director of the Acropolis Restoration Service, Hellenic Ministry of Culture & Sports.

Dr. Prof. Renaldas Gudauskas, Director General of the National Library, opened the event by congratulating the diplomats, attendees and organizers of the event.  He expressed his gratitude to them for meaningful cooperation and shared his excitement about the initiatives that contribute to strengthening diplomatic ties and encourage to search for new forms of cooperation on an international scale.

As the Ambassador Dr. V. Dicopoulou pointed out, the “Records in Memory” exhibition travelled to Lithuania because the Hellenic Ministry of Culture and Sports presented it as the contribution of the Embassy of the Hellenic Republic in Vilnius dedicated to the celebration of the 100th year Anniversary of the Restoration of the Independence of Lithuania.  The Ambassador expressed her condolences over the death of the propylaea restorer whose portrait is displayed at the exhibition.

The lecture presented the architecture and the construction of the monuments, with a particular emphasis on the Parthenon, the damage suffered by the monuments and their causes, and focused on the principles, the methodology and the results of the current restoration.

The lecturer explained that the Acropolis of Athens, a universal symbol of democracy and iconic World Heritage Site monumental ensemble embodying the values of the Western civilization, have suffered significant damage over the past 2500 years.  “This was the result of either natural causes (earthquakes) or human activities (fires, bombardments or shortfalls of earlier restorations),” V. Eleftheriou said.

The Director of the Acropolis Restoration Service said that the Modern Greek State after its establishment in the 19th century, began focusing on the preservation of the monuments.  “But it was only during the last 40 years that the conservation of the monuments has become a part of an integrated protection framework, combining research, in-depth documentation and implementation on the basis of an approved methodology, in accordance with the ethics deriving from international conventions. A special Service of the Hellenic Ministry of Culture and Sports has undertaken the conservation and restoration of the Acropolis monuments under the supervision of an interdisciplinary scientific Committee,” V. Eleftheriou said in her lecture.

The attendees of the meeting were also intrigued by the documentary on the propylaea restoration screened at the event. The Ambassador of the Hellenic Republic Dr. V. Dicopoulou thanked the National Library for cooperation and said she was looking forward to meeting again at the library and engaging with joint projects.

The photography exhibition entitled “Records in Memory: Recalling Moments of the Propylaea Restoration” reflecting the unforgettable contribution of people in restoring the magnificent Greek monument, is on display at the National Library's 5th floor Atrium until 30 September. 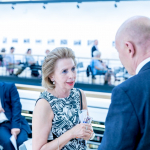 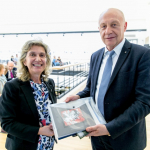 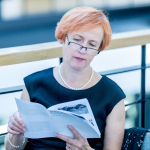 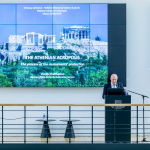 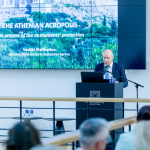 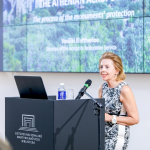 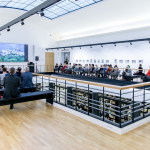 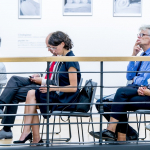 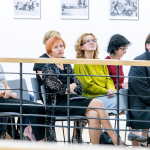 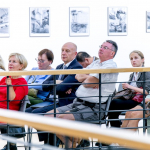 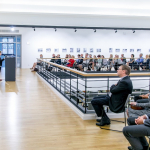