27 May: Discussion with Brian Whitmore “Russia and the West: A New Era of Conflict?”

Do Lithuanian and the U.S. policies towards Russia coincide? What are the main similarities and differences? War in Ukraine and Russian interference into the U.S. Presidential election forced the U.S. to reassess Russia-posed threats. How did U.S. foreign and security policies change in relation to these events? President Donald Trump has met his Russian counterpart for several occasions. What impact did these meetings, as well as characters of both presidents, have on bilateral U.S. – Russia relations? Furthermore, given that Lithuania sees the U.S. and NATO membership as main guarantors of its security, do Western sanctions against Russia work? What else could the international community do to ensure Europe’s territorial integrity and safety of people?

On May 27, at 5.30 p.m. join us in searching for answer to these questions together with Mr Brian Whitmore, Senior Fellow & Russia Program Director, Centre for European Policy Analysis (CEPA). For European audiences Brian is best known for his blog The Power Vertical, which he authored during his service as a journalist with Radio Free Europe/Radio Liberty in Prague. He previously lived and lectured at universities in Odessa and Saint Petersburg. He is an often visitor in the Baltic states and never misses an opportunity to share his insights with local audience. He is a strong supporter of the Baltic’s approach towards Russia and often distinguishes Lithuania as an example on how to address the threats posed by Russia.

The discussion will be moderated by Mr Ruslanas Iržikevičius, Chief Editor of The Lithuania Tribune.

The event is organized by the Eastern Europe Studies Centre. It is supported to by the Baltic-American Freedom Foundation 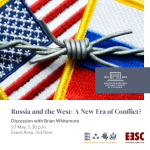