Martynas Mažvydas National Library of Lithuania will hold a launch event for the book entitled Spain, a Global History by Luis Francisco Martínez Montes, writer and diplomat. The book has been recently published in both Spanish and English. Historian and writer Dr. Artūras Vasiliauskas will also be among the event attendees. The event will be facilitated by the Ambassador of the Kingdom of Spain to Lithuania, José María Robles Fraga. The discussion/launch event will be held in English.

From late 15th to early 19th century Spain was one of the largest and most powerful monarchies as well as one of the most diverse political communities in the world. During its heyday, the Hispanic territory stretched from the Castilian plateau to the high peaks of the Andes, from the cosmopolitan cities of Seville and Mexico to Manila in Philippines. During those centuries, Spain left its imprint on the cultural, economic and political life across different continents. Extraordinary cultural exchanges took place in nearly every corner of the Hispanic world, no matter how distant from the metropolis: an Andalusian Dominican priest was writing the first Western grammar of the Chinese language; Franciscan friars were composing polyphonic church music to be played in a church in a Peruvian valley; the Jesuit Order were pursuing educational activities; Miguel de Cervantes Saavedra was writing Don Quixote; and Diego de Silva y Velázquez was painting Las Meninas...

Whenever we see the works by Diego de Silva y Velázquez or Francisco Goya in the Prado Museum in Madrid, when we visit a Jesuit church in Rome or when we hear Spanish being spoken in a myriad of accents in the streets of San Francisco, New Orleans or Manhattan, we are experiencing some of the past and present fruits of an always vibrant and still expanding cultural community. In his book, L. F. Martínez Montes explores how Spain and the Hispanic world have contributed to world history, its imprint across continents as well as its influences on various cultures and countries during different historical periods. The monograph focuses not only on the apogee of Spain’s power but also on the history of the country spanning across several centuries as well as the modern-day world.

The author of the book, L. F. Martínez Montes, is a writer, diplomat and traveller. He studied International Relations and Political Sciences. He previously served as a counsellor to the Permanent Mission of Spain to the Organisation for Security and Co-Operation in Europe (OSCE), and Deputy Head of Mission at the Spanish Embassy in Almaty, Kazakhstan. While posted in Central Asia, L. F. Martínez Montes developed an interest in the history of Inner Eurasia and has written and lectured extensively on the new actors and dynamics shaping the lands stretching from Moscow to Beijing. He has written numerous articles on U.S.-China relations, Spanish foreign policy and EU trends. 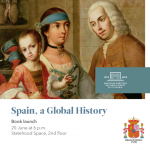