The National Library is delighted to announce that two new items of documentary heritage have been included in Lithuania’s National Memory of the World Register.

The first one is a collection of works by Vilna Gaon, Jewish thinker Elijah ben Solomon Zalman (1720–1797) published in different cities and countries of Europe between 1799 and 1940. It contains several very rare publications and almost all of them exist as a single copy in Lithuania. It is paradoxical that Vilna Gaon never published any of his texts during his lifetime. His teaching was scrupulously written down and compiled by his pupils, sons and son-in-laws, and were edited and published after his death. He spoke on all important topics of Judaism and Jewish religious world view including Jewish religious law, deep Talmudic textual analysis and biblical studies, ethics and kabbalah. By studying all these topics, Elijah ben Solomon Zalman provided deep insights and shaped the analytical attitude characteristic of Lithuanian Jews toward religious texts and practices enshrined in them. The textual legacy of the Vilna Gaon helped to spread his teaching around the world and put Lithuania on the map as the Jewish intellectual and religious studies centre.

The second item of documentary heritage includes eleven manuscripts by Simonas Daukantas (1793–1864), Lithuanian historian, writer and educator. The works written between 1831 and 1858 covers important fields of his interest including historiography, translations of Antique and new authors and lexicography. A joint application for the assessment of this unique collection of document was submitted in cooperation with the Institute of Lithuanian Literature and Folklore and Vilnius University Library. Eight items from this body of manuscripts are stored at the Institute of Lithuanian Literature and Folklore, two of them are kept at Vilnius University Library, and one is stored at the National Library. The latter one is the final copy of the preface Jistoriję Justinaus of Pompeius Trogus’ draft of the historical epitome Historya Justina translated from the Latin language (parguldę Isz Łotynû kałbôs i Zaemaitiû K. Daugkientys metusî 1798, Saint Petersburg, after 1834, 7 pages).

Daukantas’ works are of great significance for Lithuanian culture. His manuscripts are an abundant source of knowledge for the textological studies of Daukantas works and for the studies of culture in general. The collection of Daukantas’ manuscript is truly unique. Those eleven manuscripts were written over a period spanning nearly 30 years thus they reflect the years of the author’s creative maturity.

The official ceremony for the award of the UNESCO’s Memory of the World programme certificates will take place on 20 September 2019 at the Martynas Mažvydas National Library of Lithuania. This will be one of the most important events dedicated to the European Heritage Days organised each year. 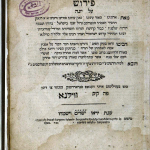 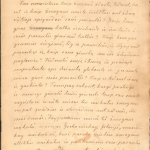