The opening of the exhibition will take place on the 27th of June in the Atrium of the National Library. The event will be hosted by the essayist Valentinas Sventickas. Among the attendees of the event will be Antanas Sutkus and Dr. Arūnas Gelūnas, the Director of the Lithuanian Art Museum, who will give the welcome address. The exhibition will run until the 28th July of this year. 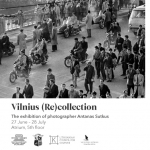