The members of the delegation also shared their own experiences and gave an overview of the trends currently observed in Japan. They pointed out that for a long period of time, the most important function of libraries in Japan was lending books in order to disseminate knowledge by promoting reading. In recent years, Japan has been experiencing the issue of ageing population, and senior citizens spend more time in libraries which further strengthens the role of libraries. The libraries of the land of the rising sun are also engaged in business promotion, support companies in their development and provide comprehensive assistance for new businesses. Moreover, Japanese libraries offer an increasing number of services to young people, hosting music rooms, workshops, dance halls, etc. Libraries often join forces with children education and lifelong learning institutions, thus in a way becoming integrated centres.

In light of all these changes in the Japanese library system, the guests wanted to learn about the experiences of the National Library and other Lithuanian libraries in developing and implementing innovations and modern services and in bringing together communities. 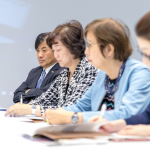 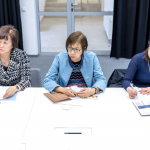 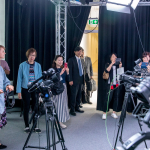