This exhibition borrows its title from the name of a sequence of works by the American artist Barbara Kasten. Created in the early 80s, Kasten’s “Construct NYC” is a series of photographs depicting different small-scale architectural environments carefully arranged in Kasten’s studio. These “stage-sets” consist of combinations of geometric figures made from industrial materials, as well as neoclassical sculptural elements – forms reminiscent of those found in the skyscrapers surrounding Kasten’s studio in Chicago. The colourful photographs, which are created by using Hollywood lighting techniques, seem to document the tension between our presumptions about reality and the artist’s management of physical materials and their intrinsic qualities – a tension exposed by the precision of camera angles. Correspondingly, this exhibition of photography under the same title considers architecture both as a process of mental activity and a political practice, a form of communication which is seen leaking and stretching in different directions, accompanied by the urge to construct and the proximity of void.

According to the Japanese architect Itsuko Hasegawa, yet another artist in the show: perhaps a city can be described as being inside yuragi – a Japanese term for fluctuation which, if used metaphorically, refers to state of a constant vacillation and vagueness, in which it is not possible to tell where one is heading. In this case, the buildings are destined to remain in “a forever unfinished state”, together with the environment surrounding them. Describing her take on architecture, Hasegawa underlines the importance of a relationship between living environment, enduring qualities within local areas and the nature or the weather. Her reference points include a Japanese curtain called “manmaku”, which is spread during events when performing arts are staged, or sunshades on beaches during the summer, which are put away with the arrival of autumn, restoring the “beautiful lines of the beach again” [1]. Hasegawa’s reference to the situation of fluctuation, can be seen as a guide to this exhibition, which asks its visitors to reject the stability of any solid ground, any permanent understanding of scale or functionality as such, as the different architectural structures and forms on show exceed each other before falling apart.

The exhibition is dedicated to the 100th anniversary of the National Library.

Brief information about the exhibition: 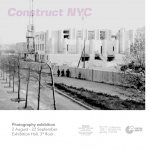