On 7 August, among the first visitors greeted at the Martynas Mažvydas National Library of Lithuania were a delegation of 22 teenagers from the conflict zone in Donbass as well as the group’s leaders accompanying them. The delegation came to Lithuania to get to know Europe better.

The Ukrainian delegation’s visit at the National Library was part of their week-long stay in the country. “It is symbolical that the National Library is the first stop in a series of visits we will be making. The main library in Lithuania is a platform for dialogue and democracy. That is why we chose to bring them here first. Today you see a group of children but they are the future of Ukraine who will soon contribute to the development of their country. It is very important that the children coming from the war-afflicted area see how people work, create and improve oneself in a free country. They need to take a breath of freedom. Our friend, Lithuania, is a great destination where young people can get inspiration and ideas as to what they can do for their country so that we can enjoy the same level of success in our country,” said the group leader, Larysa Artiugina.

The guests were greeted by Prof. Dr. Renaldas Gudauskas, Director General of the National Library. The head of the library talked about cultural diplomacy and the National Library of Lithuania, topics relevant to both the national institution and the country itself. The young visitors who are students at the Documentary Filmmaking and Media School were later offered the opportunity to look around the library’s professional TV studio, got know the specifics of its activities and were also given a comprehensive introduction to the library itself accompanied by a professional guide, long-time library staff member, Olga Zimareva.

At the end of their visit, the members of the youth delegation watched a film titled Leitis which was specifically selected by the library’s editor-in-chief Aida Vėželienė who took account of the fact that the guests came from a conflict-torn region.

The National Library aims to continuously promote and develop inter-cultural relations with Ukraine. To commemorate the 400th anniversary of the Basilian Order, a solemn opening ceremony of the exhibition of the old and rare books published by Vilnius Basilian printing house and kept at the National Library was held in 2017. The event also included a roundtable discussion attended by Volodymyr Yatsenkivskyi, Ambassador Extraordinary and Plenipotentiary of Ukraine, and Sviatoslav Shevchuk, major archbishop of the Ukrainian Greek Catholic Church. In 2017 and 2018, our library hosted the exhibitions by Ukrainian and Lithuanian photographers (“Life on Ground Zero” by J. Velička and “Maidan, February 2014” by L. Skirpstas). From January to May 2018, the library organised a series of film screenings dedicated to the current issues in Ukraine. The event programme also included video conferences with the film cast, directors and the Ukraine community in general. In 2019, the National Library received books on the war in Ukraine donated at the initiative of L. Artiugina, film director and leader of the organisation New Donbass. In 2017 and 2018, the library held book launch events for the books by Lithuanian and Ukrainian authors on the topic of Ukraine: R. Bogdanas’s Ukrainos tridantis. Prie bedugnės and R. Zinenko’s The Ilovaisky Diary. 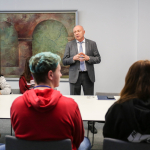 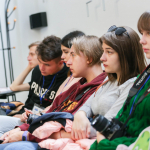 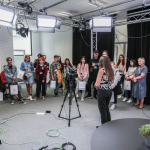 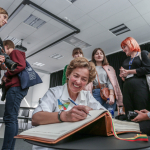