The poster of the National Library received worldwide recognition

The poster of the National Library received worldwide recognition

During this year’s General Conference of IFLA, organization that unites the world’s libraries, the poster of the Martynas Mažvydas National Library of Lithuania was selected as the Best IFLA Poster 2019. 198 posters had been presented from various countries.

On 24–30 August, Athens, Greece, hosted the 85th General Conference and Assembly of the International Federation of Library Associations and Institutions “Libraries: dialogue for change”. Delegation of Lithuania’s librarians headed by the Director-General of the National Library Prof. Dr. Renaldas Gudauskas were also among the participants of this global event.

During the Conference, there was an exhibition, which introduced technological innovations and innovative library services, presented the opportunity to get advice and informational material and provided an occasion for communication. In all this, the focus was on transforming library activities and establishing new activity models and services to the public.

There was also the election of the best poster. Posters by various libraries, associations and organizations, having passed the acceptance procedure, were displayed in certain places. 198 posters from Japan, USA, Denmark, Germany, China, Austria, France, Italy, Greece, Norway, Canada, the Czech Republic, Poland and other countries were presented. The award for the Best IFLA Poster 2019 went to the poster of the Martynas Mažvydas National Library of Lithuania “Every good adaptation is also an innovation” as a decision of an authoritative jury, members of IFLA’s Professional Committee. The authors of the poster are Donatas Kubilius, Adriana Daškevič and Giedrė Čistovienė and the designer is Vaida Gasiūnaitė.

The poster introduces the creative space at the National Library. When presenting activities of the National Library’s creative space Pats sau (Do-It-Yourself), the administrator of the space Donatas Kubilius also spoke about shifts in the users’ perception of the traditional library during the digital era, the way how traditional library activities are transforming into new services and what practice is applied to strengthen the community of the users of innovative library services.

The closing session of IFLA’s General Conference and Assembly featured the summing-up of the results of the Congress, announcement of acknowledgements and presentation of awards. This congress of the world’s library institutions was hosted by the President of the Republic of Greece Prokopios Pavlopoulos. 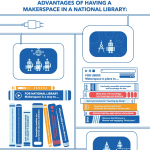 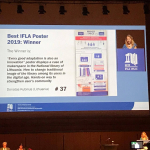 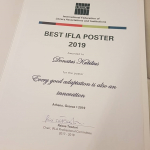