The spring of 2018 saw the publication of a unique book titled The Story of BATUN – Baltic Appeal to the United Nations (1966–1991) by Estonian-born author currently residing in the U. S., Sirje Okas Ainso. The book depicts the independence struggle of the three Baltic countries outside Lithuania. The Martynas Mažvydas National Library of Lithuania will host the launch event for this unique publication as well as a discussion with the author which will be moderated by diaspora researcher Dr. Ina Ėmužienė. The event will be held in English.

BATUN was a movement which involved Lithuanians, Latvians and Estonians in exile and which was dedicated towards the restoration of independence of the Baltic states and their admission to the United Nations. In the preface of her book, the author states that the purpose of the book is to immortalize the activities of the BATUN movement and to keep the memory of the activists of this organisation alive rather than to analyse or examine the organisation itself. It is only a second publication ever devoted to the history of this organisation.

The book gives an overview of the historical narrative of the Baltic states, the footmarks of the shared spirit of the three Baltic nations within the BATUN movement. The author constructs the storyline using documents, photographs and personal insights. The book contains photographs depicting various meetings and their participants. The monograph also includes a collection of archival documents containing not only the documents associated with BATUN’s activities but also its members’ correspondence with ambassadors, materials compiled and disseminated by the organisation as well as the examples of the information publication BATUN News.

BATUN history started on 12–13 November 1965 in a massive rally in New York. The main organisers of the rally were the members of the Committee for the Restoration of Lithuania’s Independence. Following the rally, the first steps to raise the issue of occupation were taken and the first meetings with the ambassadors of the member states of the United Nations were held. Over the years of its existence, BATUN not only brought together the three Baltic countries to work with the United Nations but also prepared numerous information bulletins and books on repressions and human rights violations in the occupied countries as well as disseminated thousands of letters and memorandums to the diplomats of the member states of the United Nations, various organisations and media outlets.

Sirje Okas Ainso is an artist and long-time member of BATUN. She grew up in Argentina where she graduated from the National University of Buenos Aires. In 1968, she and her family emigrated to the U.S. She studied Art at the NY State University. She joined BATUN in 1969, becoming an activist, a board member of the organisation, and a delegate to the United Nations missions and to the UN Commission of Human Rights. Okas Ainso is a world-famous artist whose works explore cultural diversity and a wide range of interests. The focus of her works is almost always the human figure and the stories behind it. Okas Ainso’s works are exhibited across Europe, the United States and Canada. 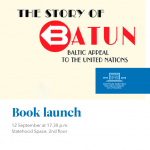