Martynas Mažvydas National Library of Lithuania invites you to the “Conductor with a Brush” – an exhibition of children's book Illustrations by Kęstutis Kasparavičius. The exhibition was organized on the occasion of the international conference "Visual Language in Children's Literature". The conference is organized by the National Library together with the Lithuanian Branch of the International Association of Children and Youth Literature (IBBY) as part of the Reading Promotion Program approved by the Ministry of Culture and the Ministry of Education, Science and Sport. The international conference and other events will be held in October 9-10 this year at the Conference Hall of the Parliament of the Republic of Lithuania and the National Library.

The artist’s career can be divided into three periods: an early period, a mature phase and a late period. Kasparavičius started his creative journey in the 1980s. His early works featured almost monochrome palette with tonal nuances and graphic brush strokes. The artist used a feather quill to create graphic drawings coloured with watercolour paint. In his mature phase, his work branched out in two stylistic directions: illustrations with nonsense aesthetics and realistic portrayal. His classical illustrations combine both of these styles. A vivid use of nonsense aesthetics became one of the most distinct features of his work. The artist’s watercolour illustrations have a wonderful flight of imagination, are permeated with humour and features excellent rendering technique. The portrayal of animals has become one of his most preferred forms of book character expression which shows excellent mastery. He is able to create unique characters, impart animals with humans characteristics, and render situations and illustration compositions down to the tiniest detail. All of his captivating characters surrender to his brush. Kasparavičius’s late phase began in 2003 when the artist created his first literary text for his illustrations. He discovered an aptitude for writing after Taiwanese publishing house Grimm Press asked him to write a text for his illustrations. The artist has since created 20 illustrated books for children. These are short stories with absurd or nonsensical elements about the things that surround us everyday; stories about exotic far-away lands, tales about gardens and dreams, among many others.

Kasparavičius has received numerous prizes and awards for his creative work. His illustrations have been recognised multiple times at Book Art competitions (1985, 1986, 1987, 1990, 2005, 2006, 2013, 2014), and were featured at Bologna Children’s Books Fair thirteen times. Kasparavičius is the only Lithuanian artist who has been nominated for Hans Christian Andersen Award, the most prestigious in the international children’s book world (nominated for illustration category in 2008, 2010, 2018, and 2020). He has been nominated for the prestigious Astrid Lindgren Memorial Award (ALMA) eleven times, and was awarded Children’s Literature Prize by the Lithuanian Ministry of Education and Science (2008) for his children’s books. He was also awarded the Golden Badge by the Lithuanian Artists’ Association (2010) and is the laureate of the National Culture and Art Prize (2018).  (Tekst by the art critic Jolita Liškevičienė) 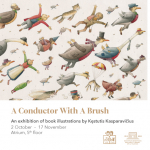