The Martynas Mažvydas National Library of Lithuania invites you to watch a story of a young Ukrainian woman, who went looking for her father, who had fallen in the Russian-Ukrainian war, and turned into a warrior’s daughter.

Spring 2014 became the beginning of the war in Eastern Ukraine. Regular Russian forces invaded the territory of sovereign Ukraine. Volodymyr Samolenko was one of the first volunteers, who enlisted in Donbas Battalion. For his daughter Olia, her father was her best friend. She will have to go a long way and spend two years of her life trying to find out what happened to her father at war. What DNA is and how a body is identified. Talking to his fellow combatants and friends, she is trying to understand why he went to war, and how that war changed him. Olia will discover her father from a different side: not only as a caring family man, but also as a person who devoted himself to his duty till his last breath.

We kindly invite you to participate in the film screening. Participants in the event: Larysa Artiugina, Marta-Daria Klinava and actress in a leading role Olga Samolenko. 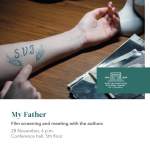