In 2019, the company of market and media research Kantar carried out a representative research of Lithuania’s public libraries commissioned by the Martynas Mažvydas National Library of Lithuania. The research showed significant contribution by public libraries to the development of digital literacy and changes in this direction during recent decades.

In the 21st century, literacy is no longer merely the ability to read and write. The notion now encompasses technological literacy, i.e. problem solving by employing technologies. Lithuania’s National Library operates as a methodical centre for the coordination of upgrading information infrastructure of Lithuanian public libraries and public internet access points there as well as the training of residents to use information technologies (IT). Since 2008, over 40 million euros from the national budget, the Structural Funds of the European Union (EU) and the Bill & Melinda Gates Foundation have been invested into the modernization of IT of public libraries under three national projects. In 2019 alone, 298,674 residents were involved in digital literacy training organized by Lithuanian public libraries or were provided consultation by these libraries. Such projects and training contribute to achieving Lithuania’s and EU priorities: the increase of digital inclusion, bridging social divide, promotion of lifelong learning and accelerated implementation of the Lithuanian Digital Agenda.

A primary criterion for assessing the digital level of a country is the EU Digital Economy and Society Index (DESI). According to it, Lithuania ranked the 13th in 2019. We now tend to forget that internet access reminded of a miracle in numerous rural areas but a decade ago.

The National Library is realizing the project “Encouraging Residents to Smartly Use the Internet Within the Upgraded Internet Access Infrastructure”, which involves the upgrading of computers at libraries and development of the internet infrastructure at more than 1200 public internet access points, thus enabling residents to join digital information initiatives such as the development of digital competences, creation of the local digital content, etc.  Libraries operating in regional centres now are capable of offering technologies that residents and households do not have. Supplying libraries with modern technologies enabled to set up new workplaces with video, sound and graphics software as well as offer visitors software for construction designed for the development of engineering skills, robotics kits and virtual reality and other devices. The purpose of all these services is to encourage the emergence of new products and services in various locations regardless of their infrastructure or the level of economy and thus contribute to bridging the digital divide.

The results of the research done by Kantar shows significant rise in the skills of using information technologies of library visitors during the recent decade: in 2009, the share of users estimating their skills of computer use as “fully satisfactory” was 51% and in 2019, it was 62%.

The research shows that every second library visitor makes use of the internet at least several times a month and one visitor out of four, every day or several times a week. The opportunity of using the internet is important for members of large families, persons with low income and residents of rural areas. 15% of visitors can use the internet only at libraries and the remaining 85%, though being able to use it elsewhere, prefer using it at libraries because of additional services such as the possibility to use a printer or copying or scanning device (important for 54% of visitors), the possibility to consult library professionals and acquire their help (important for one out of two senior visitor, especially in rural areas), etc. In general, there was significant increase of the importance of librarians and a change of their role: by 2019, the librarian had become a consultant and embodied a significant factor encouraging the use of the internet at libraries (22% of visitors in 2009 and 46%, in 2019).

The research also shows that using the internet at libraries was very useful for visitors: 46% of seniors acquired the opportunity to better care for their health, 39% of visitors improved their social lives (communication with their intimates and friends), 33% of visitors improved their job performance, 24% of persons with low income were able to save money and 11% of visitors persons were able to find a job (8% of respondents indicated that the possibility to use the internet at libraries helped them find a job; it means that libraries served as an aid to integrate into the labour market or remain there for at least 373 persons).

This representative research was underway from 28 May 2019 until 3 October of that year and involved 4668 library visitors of fifteen years of age and older. At present, there are 1240 public libraries in Lithuania, out of which almost 1000 are in rural areas. On average, there is one library per 2254 residents and the average number of visitors per year is 9.3 million. See more information about the research here. 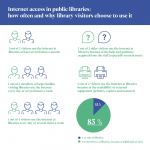