Round tables cycle Jews of Lithuania and Russia

During the academic discussion between prominent researchers and scholars of Jewish history and historical memory from Lithuania, Russia and other countries, various topics will be analysed and discussed including: the dynamic formation of the identity of the Jews of Lithuania and Russia from the second half of the eighteenth century, when Lithuanian Jewry became the first in Eastern Europe to perceive the ideas of Haskala,   and to this day, as we face the difficult evaluation of the painful and tragic history of the twentieth.

The project outlined above will include three thematic round tables:

The dates of the second and third round tables will be announced later.

These meetings will acquaint the Russian audience with the history and cultural heritage of Lithuanian Jewry, with the problems of Lithuanian-Jewish relations, and will facilitate dialogue between Lithuanian and Russian researchers. Six people will take part in each of the round tables: three researchers each from the Lithuanian and Russian perspectives. In addition, each round table will be accompanied by the viewing and discussion of video materials directly relevant to its theme (animation, recordings of performances, documentaries and films).

The cycle of round tables will conclude with a concert by cellist Alexander Ramm, which will feature compositions by Jewish, Lithuanian and Russian composers.

Authors and main participants of the project:

Detailed information on the date, place and format of each round table will be available on the website, of the Embassy of the Republic of Lithuania, on the Embassy‘s Facebook page, as well as on the web pages of „Memorial“ and the Russian jewish congress.

1 International Memorial is included in the registry as foreseen by Article 13.1.10 of the Federal Law "On NGO“ 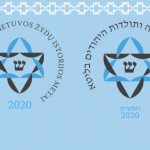