The evening of 20 October saw the opening of the exhibition of publications and documents culminating the Year of the Vilna Gaon “Shenot Eliyahu / Elijah’s Years: the Impact of the Vilna Gaon on the Lithuanian Jewish Culture”. During the formal opening ceremony, the word shalom resounded time and again under the National Library’s vaults, a Hebrew word for wishing peace of mind and safety.

The guests of the opening ceremony were the first who had the opportunity to see three unique things: the exhibition itself, a synagogue pinka (chronicle) preserved at the YIVO Institute for Jewish Research in New York, which is exhibited by using a hologramic projection (arguably its most important showpiece), the collectible silver coin of 10 euros issued by the Bank of Lithuania and devoted to the 300th anniversary of the Vilna Gaon (Elijah ben Solomon Zalman). They also had the opportunity to listen to the premiere of the musical work Elijo skambantis trikampis („Elijah‘s Ringing Triangle“) (composer Arkadijus Grotesmanas, installation author Grigorijus Zundelovičius).

In his welcoming speech, the National Library‘s Director-General Prof. Dr. Renaldas Gudauskas particularly emphasised the significance of the year of 2020 declared as the Year of the Vilna Gaon and the Lithuanian Jewish Culture as a year which would get anchored in everybody‘s memory. He also said that in order to commemorate, promote and monumentalise significant historical personalities and their deeds as well as historical turning-points, numerous events (exhibitions, discussions and book presentations) had been going on throughout Lithuania and abroad starting with the January of 2020.

To quote Director-General Gudauskas, “The National Library is an active partner of the events of the anniversary year and it is natural for us to do so as the Library holds a unique and one of the most extensive collections of the Jewish documentary heritage. The value and uniqueness of the Judaica documents preserved at the Library is attested to by the fact that even three corpora of documents including the collection of books by the Vilna Gaon are included into Lithuania’s national register of UNESCO’s Memory of the World Programme. Our remit is to promote this heritage nationally and internationally. This is the only collection of works by the Vilna Gaon of such an extensive volume in Lithuania. It testifies to the vastness of this thinker’s mental outlook and allows considering him a true giant of the research of classical Jewish texts.”

Israel’s Ambassador to Lithuania Yossef Levy expressed sincere thanks to the National Library, the Bank of Lithuania and the Ministry of Foreign Affairs for their “visionary” activities, enthusiasm and marvellous achievements. To quote Ambassador Levy, “Before arriving in Lithuania, I had no idea what a great researcher, rabbi, thinker and Israeli Jew the Vilna Gaon was. He was an Outstanding Jew. I salute the idea to commemorate and show to the world the Vilna Gaon and his undertakings and am grateful for it.”

The Vice-Minister of Culture Ingrida Veliutė said that the Ministry of Culture, when scheming the programme for the commemoration of the Vilna Gaon at the outset of the year, did not realise that this year would be so exceptional. To quote Vice-Minister Veliute, “The Vilnius discourse was very lively and active as well as marked by tremendous public interest and cultural variety. In spite of the fact that part of the events migrated to the virtual environment, the entire year was very creative and rich in achievements in promoting the Jewish heritage. I am proud of the traditions of the multicultural Lithuania persisting since the times of the Grand Duchy of Lithuania.” She also conveyed thanks to the National Library’s diligent staff from the Ministry of Culture.

The Vice-Minister of Foreign Affairs Dalius Čekuolis emphasised the National Library‘s successful international cooperation. He said, “Of special mention is the fact that the National Library, while studying and presenting to the public the Jewish heritage, has been long involved in international partnerships. Of these, the most noteworthy is the YIVO Institute for Jewish Research in New York. Joint projects implemented by these two institutions, especially the digitisation of the YIVO archives, are of exceptional importance.”

The host of the opening event Silvija Stankevičiūtė conveyed greeting and best wishes to the ceremony‘s guests and the exhibition‘s organisers from the long-standing partner of the National Library and the Executive Director of YIVO Jonathan Brent.

The Chairperson of the Lithuanian Jewish community Faina Kuklianski said that everything that was being done in order to commemorate the Vilna Gaon and promote his wisdom was extremely important. She reminded of the sage’s words about the significance of knowledge: knowledge makes Man a Man and Jew a Jew.

The Chairman of the Board of the Bank of Lithuania Vitas Vasiliauskas said that he was proud of the decision to issue a new coin. To quote Chairman Vasiliauskas, “By issuing the collectable silver coin dedicated to the 300th anniversary of the Vilna Gaon, we express our respect for one of the most prominent personalities in the history of Lithuania’s and the world’s Jews as well as appreciate the contribution of the Jewish cultural heritage to Lithuania. Because of the authority and fame of the Vilna Gaon, Vilnius gained worldwide renown. It is very meaningful.” He assured that it was certainly the first coin with Jewish symbolism ever issued in Lithuania.

The curator of the exhibition „Shenot Eliyahu / Elijah’s Years: the Impact of the Vilna Gaon on the Lithuanian Jewish Culture” the Head of the Judaica Research Centre at the National Library Dr. Lara Lempertienė invited the ceremony’s guests to get acquainted with unique exhibits. She said that “The exhibition showcases not only texts by Elijah ben Shlomo Zalman but also fragments from his life and the impact of this exceptional personality on spiritual and intellectual life and culture of Lithuania’s Jews. The exhibition serves as an expression of respect for Gaon’s heritage and acknowledgement of its importance.” She informed about tours around the exhibition and that the information about them would be available on the National Library‘s Website and in its social networks until December. She also expressed sincere thanks to the entire preparatory team, partners and sponsors.

“The Torah itself spoke: I am the wisdom that has found refuge in the soul of Elijah and through him I have become known throughout the world”. This fragment of the epitaph carved on the tombstone of Elijah ben Solomon Zalman perfectly reveals the significance of this sage, who is better known as the Vilna Gaon, to Lithuania‘s and the world‘s Jewish culture.

The exhibition will be open until 31 December. 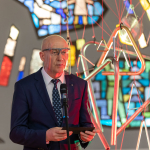 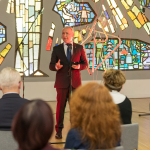 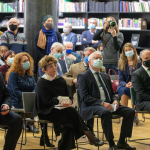 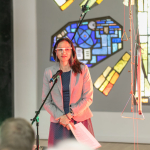 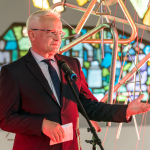 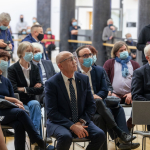 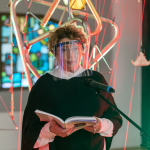 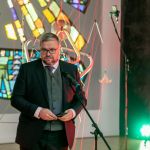 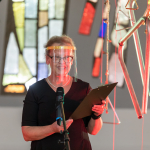 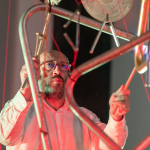 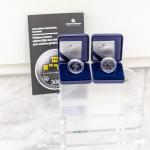 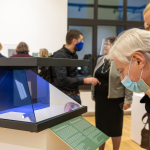 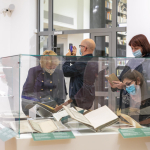