This Tuesday, the Martynas Mažvydas National Library of Lithuania held a ceremony to award the winners of the photography competition “Sakuras in Lithuania” organised by the Embassy of Japan. The event was attended by the First Lady of the Republic of Lithuania Diana Nausėdienė, Ambassador of Japan Shiro Yamasaki, Director General of the National Library Prof. Dr. Renaldas Gudauskas, and the Minister of Culture Simonas Kairys.

The organisers received more than 300 entries for the photography competition. The jury panel selected top 20 entries which are now on display at the National Library.

Prof. Dr. Renaldas Gudauskas, Director General of the National Library, gave a welcome speech at this special event. He pointed out that the photography exhibition “Sakuras in Lithuania” coincides with the commemoration of two historic events that we celebrate this year – the 30th anniversary of re-​establishment of friendly diplomatic relations between Lithuania and Japan and the 20th anniversary of Sakura Park in Vilnius.

“A great number of sakura trees symbolising friendship between the two countries were planted in Lithuania throughout all these years. These trees took root in Lithuania and we have grown very fond of them. This is evidenced by the great number of attendees at the exhibition, the geography of sakura gardens, and, of course, the beauty of the blossoms captured in the photographs sent for the competition. The National Library which is actively involved in cultural diplomacy was more than happy to accept the offer of the Embassy of Japan to host the exhibition “Sakuras in Lithuania” in the Library’s exhibition spaces,” said Prof. Dr. Renaldas Gudauskas.

Shiro Yamasaki, Japanese Ambassador to Lithuania, expressed his sincere gratitude to the participants, organisers and sponsors of this competition. “In Japan, plum trees are the earliest trees to blossom after winter. They are followed by sakura trees. In Lithuania, sakuras are the first ones to blossom, and it is a real pleasure and honour for us to witness that. We came up with the idea to organise this photography competition in order to encourage Lithuanian people to get to know sakuras and to help expand the community of sakura enthusiasts. In spring, Japanese people can admire pink mountain views. I hope that Lithuania and Japan will continue to foster their friendship and that Lithuania will also be splashed in a sea of pink in spring,” said the Ambassador.

The First Lady of the Republic of Lithuania, Diana Nausėdiene, thanked the Ambassador and his wife for their initiatives in developing charity and art projects that bring together people’s hearts, cultural communities and universities, and expressed her delight at the joint projects between Japanese and Lithuanian medical professionals.

“There are already a number of sakura gardens in Lithuania. For our nation, sakuras are the symbol of nature’s rebirth and the symbol of our friendship with Japan which always manifests itself in new blossoms adding authentic beauty to the unity of Lithuanian and Japanese nations and to the cooperation of our people in multiple fields,” said the First Lady of Lithuania, D. Nausėdienė, in her welcome address.

The First Lady congratulated the winner of the competition Kšyštofas Jankunecas and handed him the prize.

The winners of the competition received valuable prices, Canon cameras, from the Japanese corporation Canon. The top 20 photographs will be on display in the Statehood Space at the National Library until 22 July. The exhibition will later be brought to other Lithuanian libraries so that the visitors can get to admire the captured moments of this year’s cherry blossom season in Lithuania. 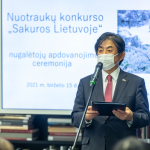 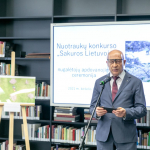 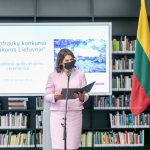 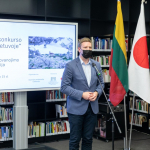 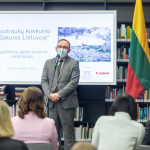 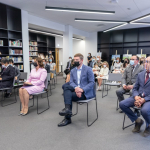 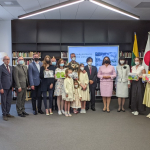