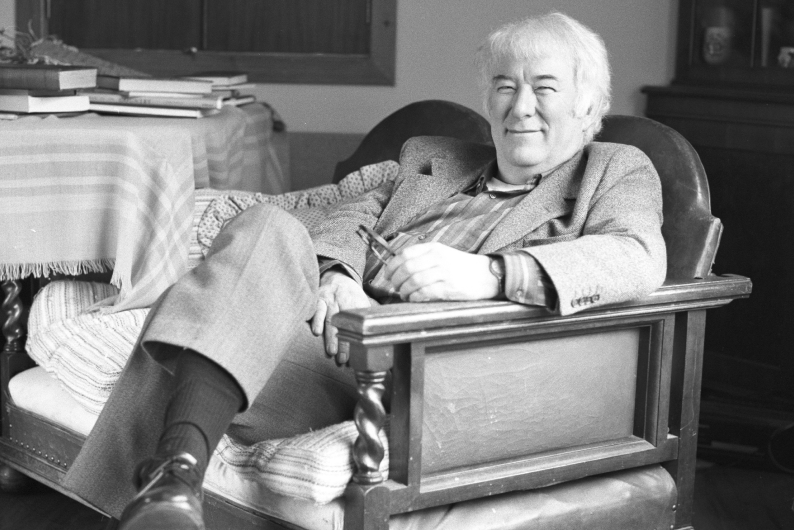 Seamus Heaney was born in 1939 in Co Derry, Northern Ireland.  His first collection of poems, Death of a Naturalist, was published in 1966, and was followed by books of poetry, criticism and translations, which established him as the leading poet of his generation.

In 1995, he was awarded the Nobel Prize for Literature.  The citation referred to “works of lyrical beauty and ethical depth, which exalt everyday miracles and the living past”.

He twice won the Whitbread Book of the Year award, for The Spirit Level (1996) and Beowulf (1999), a translation of the Old English epic.  Human Chain, the last volume of poems published before his death, won the 2010 Forward Prize for Best Collection.

Seamus Heaney had a 25-year association with Harvard University, where he was named Boylston Professor of Rhetoric and Oratory in 1984.  He was Professor of Poetry at the University of Oxford from 1989 to 1994. He died in 2013.

The panels invite us to trace elements of Seamus Heaney’s journey as a poet from the familiar fields of his home place in Mossbawn, Co Derry, to the wider world.  Moving through Heaney’s political engagement with civil and human rights, we end with his legacy as a beloved public figure, a Nobel laureate who represented the best of the Irish people.

The panels on display in the Martynas Mažvydas National Library Vilnius are supplemented by a display of books by or about Seamus Heaney, drawn from the personal collection of Peter McIvor, the Ambassador of Ireland to Lithuania.