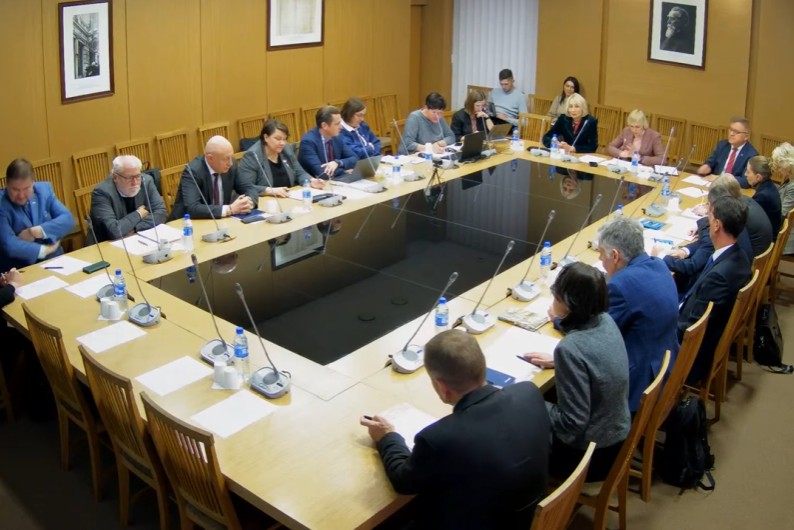 On December 7, 2022, the Commission for the Cause of Freedom and the National History Memory of the Lithuanian Parliament (Lith. Laisvės kovų ir valstybės istorinės atminties komisija) held a discussion on the history policy-making in Lithuania at the Seimas.

The representatives of the President’s Office, the Government, ministries, the academic community as well as members of other institutions that actively contribute to the development and implementation of history policy attended the event. The participants of the discussion talked about how policy in the field of history is being shaped today, which institutions are active and how coordinated they are. The aim was to discuss challenges, successful projects and initiatives in the field of policy-making of Lithuanian history.

Two representatives of the National Library of Lithuania, the Director General Prof. Renaldas Gudauskas, and the Director of the Documentary Heritage Research Department, Dr. Jolanta Budriūnienė, participated in the meeting.

In his presentation, Prof. Gudauskas emphasized that the National Library of Lithuania has implemented the policy of Lithuanian history based on the resolutions of the Seimas and the instructions of the Government and the responsible ministries. In this way, events of national importance and anniversaries of the most significant personalities are commemorated.

The dissemination of the documentary heritage housed in the Library based on the results of scholarly research is another important direction. The National Library’s activities in this field include making relevant the themes from the 19th- and 20th-centuries history of Lithuania. Here, the focus is on the First Republic of Lithuania (1918-1940), Lithuanian freedom fighting and resistance (1944-1989), the history of the Lithuanian diaspora (from the 19th century onwards), and the events and personalities of the newly restored Lithuanian state (from March 11, 1990).

Prof. Gudauskas noted that in recent years the Library’s activities in this field have branched out significantly and now include publishing, exhibitions, conferences, seminars, public events, and educational programs. One of the prerequisites for success in this field is that the National Library of Lithuania is a user-oriented organization, often described as a people’s library. Its activities are developed and catered in response to the wishes and expectations of its patrons. The expertise of the Library’s staff and its wide networks of cooperation with national and international organizations enables to present the results of its activities not only in Lithuania but also abroad.