Transforming Lithuania into a knowledge society in the revived National Library

Transforming Lithuania into a knowledge society in the revived National Library

Since 2010, Renaldas Gudauskas, 58, has been the director general of the Martynas Mazvydas National Library of Lithuania (Mazvydas was the author of the first printed book in the Lithuanian language, which was published in 1547, and, therefore, the Lithuania’s national library is named after him). 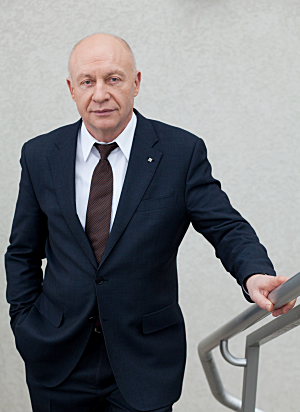 During the last eight years, the library was partially closed because the massive building, built in 1963, which is situated within an arm’s reach of Lithuanian Parliament, was under major reconstruction. It will be reopened this September and is set to become a modern-day multifunctional of culture, science, and politics in the Lithuanian capital city’s centre. One of the new features of the National Library will be the following: a Jewish research centre established in the renovated premises of the library. Gudauskas kindly agree to speak to The Baltic Times.

The National Library, one of Lithuania’s main institutions, will be fully functional again. Indeed, reconstruction took more time than was initially expected. The National Library of Lithuania will strengthen its mission in the fields of culture, education, and science as well as in the field of providing state institutions with all the necessary information. It will be a grand reopening celebration for the general public in the coming autumn. It will be a brand new National Library. There were plenty of innovations in information technologies during the last eight years. Visitors who come to our library will be able to use those IT innovations on our premises.

We also have ambition to turn the National Library, which geographically is situated close to all the Vilnius-based major state institutions as well as establishments of culture and science, into a centre of knowledge, which could boost the development of modern-day Vilnius. We will also seek to deepen the integration of the National Library of Lithuania into international nets of libraries and information centres.

Is it true that the National Library building, the construction of which began in the 1950s, was initially built using the workforce of German prisoners of war, who were captured by the Soviets during World War Two? Or is it just a folklore myth created by city dwellers?

I can’t confirm or deny it. I have no facts. It is an assumption.

Being the vice-minister at the Ministry of the Management Reforms and Municipal Affairs you saw numerous replacements of ministers and PMs. Correct me, please, if I am mistaken, but you survived then four ministers and three prime ministers; to name them, Gediminas Vagnorius, Rolandas Paksas, and Andrius Kubilius.

Yes, indeed. There were especially rapid changes in the state leadership between 1998 and 2000. I was the vice-minister for information and informatics. My job was to integrate state information policy, information data, and information technologies into the state management. On the eve of the year 2000, one of the most complicated missions for me was to be the national Y2K coordinator to solve the Millennium Bug issue in the state computer systems. (The Y2K problem, which is also known as the Year 2000 problem, the Y2K bug, or the Millennium Bug, was caused by the following circumstances: until the 1990s, many computer programs were designed to abbreviate four-digit years as two digits in order to save memory space — these computers could recognise “98” as “1998” but would be unable to recognise “00” as “2000,” perhaps interpreting it to mean 1900.) It was a difficult job in difficult times: whenever one more minister or prime minister handed in his resignation, I kept resigning too, but the next prime ministers and new heads of the ministry kept inviting me to come back to my post of vice-minister.

It is a public secret that many of the state officials coming from the Soviet era use the only foreign language, Russian. Many of them can’t even write in their native Lithuanian without making numerous grammar mistakes. Do you think that the competence level of the MPs of the Lithuanian parliament and the rest of state bureaucratic elite is too low?

It is a general problem of the entire state. I, as an expert of knowledge management, dare to say that the critical mass of professionals of exceptional competence in the strategic state governance structures is insufficient.

You mentioned earlier that the National Library will provide analytical expertise for the Lithuanian Parliament and other state institutions. What do you exactly mean by that?

The National Library has also been the parliamentary library for more than 20 years. Up until now, our library has supplied the parliament with mostly up-to-date information analysis and bibliographies. In the nearest future, we plan to expand our services and the number of our recipients. The National Library signed a co-operation agreement with the Office of the President of Lithuania, the government of Lithuania, and the municipality of Vilnius. In other words, the function of the parliamentary library will be expanded by providing other state and municipal institutions with high-quality analytical information. The future belongs to Big Data-based analysis. We hope that it will speed up the state innovation policy and competitiveness of our country.

How does the National Library of Lithuania co-operate with national libraries of Estonia and Latvia? What can you say about other international ties to your library?

We have a long and rich tradition of Baltic co-operation, which brings good results. Every other year, we meet in one of the Baltic States for exchange of the best practice at our pan-Baltic seminars named LiLaEst. We signed the Estonian parliament-initiated co-operation agreement with the national libraries of Estonia and Latvia, which are parliamentary libraries as well. As the president of Bibliotheca Baltica for the last five years — it is an association of libraries of the Baltic Sea Area. German, Scandinavian, and Polish librarians — I say that the co-operation of the Baltic States is exceptional.

The National Library of Lithuania enjoys very good relations with the British Library and the National Library of the Netherlands at the level of experts — our library orients itself towards their best practice and their modern models of activities and management. Last year, during the meeting of the International Federation of Library Associations and Institutions (IFLA) in South Africa’s city of Cape Town, I presented the future model of the National Library of Lithuania, which includes analysis of the Big Data. This presentation was chosen to be a subject for discussion at next year’s IFLA meeting in the United States.

During the recent years, the National Library — while its main premises were under reconstruction — implemented the project titled Libraries for Progress, which was funded by the Bill & Melinda Gates Foundation and the Lithuanian Ministry of Culture. The project has turned many local public libraries throughout Lithuania into community centres. Did you spend money from the Gates family and Lithuanian taxpayers for that as well?

It is a great project. The Bill & Melinda Gates Foundation evaluated the project implementation as a good job. Our national library, by implementing this project, increased the competences of local librarians, made a solid reputation for public libraries, and created modern infrastructure of information technologies for Lithuania and its system of public libraries. The project made local communities stronger.

You were adviser to Algirdas Brazauskas, the president of independent Lithuania and, later, when he took the post of prime minister. Brazauskas is a controversial figure to some Lithuanians due to his high posts in the Soviet-era Communist Party of Lithuania. What is your impression of this man?

I’m thankful to my fate for the possibility to work with Algirdas Brazauskas for almost 10 years. He was an exceptional personality. He served Lithuania well, regardless of the political and historical circumstances. His main achievement during his “communist era” was the breakaway of the Communist Party of Lithuania from the Communist Party of Soviet Union in 1989.

You did work at a university in South Korea in the 2000s. Could you notice some exceptional specifics of the South Korean mentality?

I did work at the Information and Communications University in South Korea. I visited South Korea many times and stayed there for a while. I mostly communicated with representatives of South Korean academic, political, and business circles. The state of South Korea is especially competitive. Its inhabitants are hard-working. The country is dominated by the philosophy of Confucianism, the teachings of which include high ethics in relations between individuals and the state power as well as honest social order. Of course, not all people follow those ethics there.

What about dog meat in Korean restaurants?

A usual question by CNN anchor Richard Quest: which do you prefer — e-books or traditional paper books?

I prefer to read printed paper books, but I think that e-books and other e-publications are viable, especially in the field of science communication.

“To Myself” by Marcus Aurelius (originally, Marcus Aurelius titled his work “To Myself,” but this book is internationally better known by the title “Meditations”). It crystallises the system of wisdom of integral management. I think this wisdom is good for individuals, societies, and states.

Political correctness heavily influences political analysis and political decision-making. Don’t you think that part of the general public is fed up with the self-censorship and it could cause massive support for all types of politically incorrect populists?

It is a complicated issue. It would be possible to write an entire article about it. Populism is a big problem, especially during elections.

What is your opinion about the Brexit?

Information taken from the baltictimes.com