Dr. Kęstutis Šapoka, an employee of the National Library, received a prize from the Ministry of Culture

On 15 December, prizes for journalistic works were awarded in the White Hall of the Ministry of Culture of Lithuania. Liana Ruokytė-Jansson, the Minister of Culture, presented the prizes to a journalist Margarita Alper, a historian and publicist Aurimas Švedas, and an artist and art critic Dr. Kęstutis Šapoka, who works at the Music and Visual Arts Division of the Services Department of the National Library of Lithuania.

The prize was set up in 2008. It is awarded to authors of the most significant and professional journalistic works covering culture and published in the mass media over the past year. The laureates were selected by the Lithuanian Council of Culture and Arts.

Kęstutis Šapoka has published more than 200 articles on Lithuanian modern art, more than twenty scientific papers in the academic press, and coordinated equally as many exhibitions.

In 2009, Kęstutis Šapoka received a prize for his journalistic works; in 2011, he received the Bronius Savukynas award for active involvement in the field of art criticism. This year, he received a third prize. 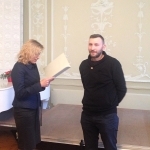 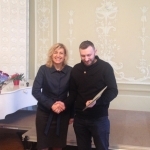 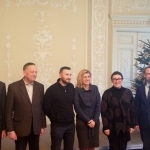