Meeting with Ralph Salinger (Israel), the researcher of Vilkaviškis Jewish community, and presentation of Antanas Žilinskas’ book Traces of a Lost Nation

On Friday, 12 May, 4 p.m., Ralph Salinger, a famous Israeli researcher of Vilkaviškis Jewish community will visit the Hub of Martynas Mažvydas National Library of Lithuania (Gedimino 51). Mr. Salinger will speak about his research of Vilkaviškis Jewish community and his colleague Antanas Žilinskas will present his book Traces of a Lost Nation (Lit. “Dingusios tautos pėdsakais”). “These historical narratives recall the traditions and customs of Jewish people, and the way they were regarded by their Lithuanian neighbours. The tone of the book is very respectful towards the Jews who had created Vilkaviškis. It is the book’s greatest advantage,” said Mr. Salinger.

The Jews settled in Vilkaviškis in the 16th century, after the queen Bona Sforza gave a land plot of the forest to the local Jews for building a synagogue, which was eventually built in 1623. In 1939, just before the Holocaust, there were 3,609 Jews living in and around the town, which made 45% of all the towns’ inhabitants. Most of the Jews were merchants and craftsmen, a small percentage were farmers and gardeners. The Jews of Vilkaviškis felt closely connected to Lithuania and regarded themselves as Lithuanians. Many of them served in the army of independent Lithuania.

Ralph Salinger was born in the United Kingdom and grew up in New Zealand. He is presently living in Israel, in Kibbutz Kfar Ruppin. When studying the history of his family, Mr. Salinger found out that his ancestors used to live in Vilkaviškis in 1805-1941. His research field has rapidly expanded to include the whole history of Vilkaviškis Jewish community. After gathering historical data on the Jews of Vilkaviškis from Israeli museums, Mr. Salinger shared his discoveries with Lithuanian researchers and the museum of Vilkaviškis.

The historian Antanas Žilinskas has worked as the Director of Vilkaviškis Regional Museum for many years. He now tells the stories of Jews in Vilkaviškis, speaks about courageous Lithuanians who were not afraid to save the Jews during the war period, and shares his recollections about the Jews born in this region travelling to their homeland to find their roots. 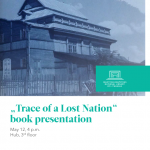