On 19–25 of August, the 83rd general conference and assembly of the International Federation of Library Associations and Institutions (IFLA) took place in Wroclaw, Poland under the title of Libraries. Solidarity. Society.

During the congress, library and information specialists had the opportunity to learn about the latest trends in the field, share experience, present success stories, feel themselves a part of a global network of libraries, meet with colleagues and discuss concerns as well as possibilities for cooperation.

At the annual conference of directors of national libraries (CDNL), the head of the Martynas Mažvydas National Library of Lithuania, Professor Renaldas Gudauskas, gave a presentation entitled National libraries – New Service Solutions, during which he presented the refurbished building and interior spaces of the National Library of Lithuania, the library’s newest endeavours and its future plans. On the 19, 23 and 24 of August, Professor Gudauskas also participated in the strategic sessions and meetings of IFLA’s Management and Marketing Standing Committee as a committee member. During the history and genealogy sitting, the professor gave a speech as a representative of the Eastern European section and highlighted the contributions of Franciscus Skorina to the history of printing in the Grand Duchy of Lithuania.

At the conference and assembly, Professor Gudauskas participated in the meetings and technological sit-downs of OCLC Ex-Libris and Global Libraries Leaders, the latter organised by the Bill and Melinda Gates Foundation.

For the entire period of the conference, participants had the chance to visit the conference fair, where they could learn about the latest technological solutions and new service options, consult with specialists, gather new material as well as contacts and make useful new connections. In addition to this, the conference was also host to a poster exhibition. The posters of various selected libraries, associations and organisations were displayed in separate dedicated spaces. This year, a poster commissioned by the Lithuanian Library Society made the cut. The closing event of the IFLA congress and assembly was used to summarise the results of the congress, express gratitude and issue awards.

Another new IFLA initiative is a map of the worlds libraries that allows viewers to find information and success stories for each point on the map: http://librarymap.ifla.org/map. It is important to note that Lithuania was the first in the world to have submitted statistical data about our country’s library system. 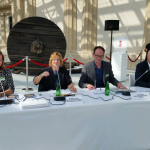