On 17 April, the exhibition titled “Across the Ocean: The Age of Friendship between Lithuania and the United States of America” was opened at the Martynas Mažvydas National Library of Lithuania. The exhibition dedicated to the centennial celebration of the restoration of Lithuanian statehood was created by the U.S. Embassy in Lithuania in partnership with a team of historians brought together by the Valdas Adamkus Presidential Library-Museum.

The exhibition explores the dynamics of U.S.-Lithuania relations throughout the last century.

According to U.S. Ambassador to Lithuania, Anne Hall, this work by historians and diplomats is a symbolic acknowledgement of the maturity of the U.S.-Lithuania relations. “The exhibition honours the many men and women, on both sides of the Atlantic Ocean, who devoted themselves to building cultural, economic, and political ties between our two great nations.  We owe a great debt of gratitude to them all. The Government of the United States and the American people look forward to another 100 years as friends and partners of Lithuania,” said the Ambassador.

The National Library’s Deputy Director General for Development of Information Resources and Services, Sandra Leknickienė, in her opening address reminded the attendees that the library has been cooperating with U.S. cultural and scientific institutions for decades and that the expatriate community has particularly contributed to strengthening this relationship.

The U.S. Ambassador to Lithuania Ms. Hall said she was happy about this unique friendship between the two countries. “The United States has proudly called Lithuania a friend for the past century. Americans and Lithuanians share a deep love of freedom, independence and democracy,” said the Ambassador.

President Valdas Adamkus emphasized the strong moral stance of the United States with respect to Lithuanian freedom. “The United States of America has always retained its moral commitment when it comes to its refusal to recognize the occupation of Lithuania. Although there were other countries that held such stance, none of them retained such a strong position throughout the occupation years,” said the President.

The head of the creative team, researcher Dr. Charles Perrin (The Fulbright Programme) spoke on behalf of his team. “My field of study is history of Lithuania. I have learned a lot of new things while working on this exhibition. It is my hope that it will help all of you learn something new today,” said the scholar.

The exhibition “Across the Ocean: The Age of Friendship between Lithuania and the United States of America” will be on display until 25 April at the Statehood Room of the National Library in Vilnius. The exhibition will be opened for permanent display at the V. Adamkus Presidential Library-Museum in Kaunas. 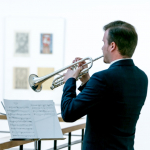 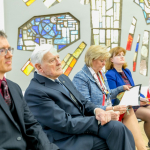 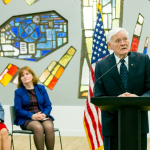 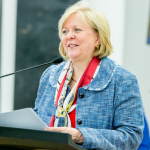 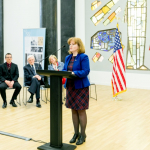 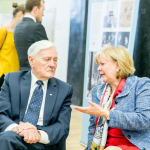 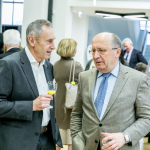 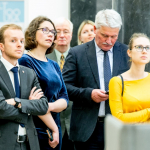 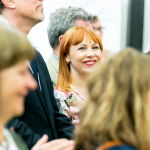 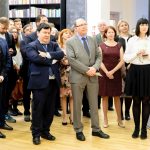 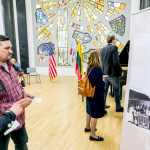 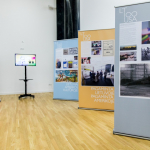 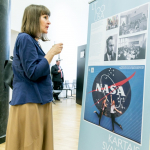