Israeli Prime Minister Benjamin Netanyahu continues his historic visit to Lithuania. Today, after a meeting with President Dalia Grybauskaitė at the Presidential Palace, the Israeli prime minister and members of his delegation arrived at the Martynas Mažvydas National Library of Lithuania for an informal meeting with the three prime ministers of the Baltic states.

The meeting addressed relations between Israel, the Baltic countries and the European Union, transatlantic ties, the peace process in the Middle East, the strengthening of global security and stability, joint action in the fight against terrorism and the development of cyber security. The dignitaries came to a common understanding with regard to support for Ukraine and discussed relations with Russia, Syria and Iran. There was also talk of collaboration in the field of advanced technology, the development of educational and scientific research and the promotion of tourism.

The quadrilateral meeting was concluded with a joint statement and press conference as well as a promise to continue strategic cooperation efforts.

During the press conference, Saulius Skvernelis, the head of the Lithuanian Government, emphasised that Lithuania is interested in strengthening its political and economic ties with Israel as it is one of the most innovative and advanced nations in the world. The key aims of this relationship are cooperation in the fight against terrorism and development in the field of technology. “Israel is our strategic partner in the Middle East. I hope that this visit will lead to even more active cooperation. Lithuania and Israel are connected by many historical and cultural ties as well as experiences,” explained Skvernelis.

“This is a great opportunity for a historical beginning,” spoke Netanyahu of his first visit to Lithuania. “I am delighted that the prime ministers have accepted my invitation to a future meeting with the Baltic ministers in Jerusalem next year,” informed Prime Minister Netanyahu, who also extended this invitation to business representatives from the Baltics.

The prime minister of Latvia, Māris Kučinskis, and the prime minister of Estonia, Jüris Ratas, pointed out the necessity of continuing to develop this partnership with Israel in developing an innovative economy, strengthening cooperation in the life sciences, technology and innovation, advanced technology, tourism and cyber security.

The participants of the historical meeting were introduced to the substantial collection of Judaic manuscripts and documents at the Martynas Mažvydas National Library of Lithuania, which makes up an integral part of its Lituanistic heritage. The collection reflects the long-standing traditions of the Lithuanian Jewish community’s active and rich cultural and community life before the Holocaust and its tragic fate during the Nazi occupation. It is well-known in Lithuania and beyond and has been included in several UNESCO heritage lists. In addition to this, it is a constant point of attraction for researchers and various segments of society.

Representatives of the Israeli delegation, journalists, and researchers of religious Jewish literature visited the Judaica Research Centre of the National Library. Dr. Lara Lempert, head of the centre, presented the history of the library’s Judaic collection in Hebrew, spoke to the delegation about the consistent and high-quality processes of identifying, managing, preserving and disseminating the documentary heritage of Lithuanian Jews and highlighted the educational projects undertaken by the Judaica Research Centre with the aim of introducing society to the history of Jewish culture, an integral part of our country’s history. Guests were delighted and surprised by how active the National Library is in the field of Jewish heritage.

The dignitaries were also shown the National Library’s visual wall dedicated to a unique phenomenon of Vilnius culture – the first public Jewish library, which operated from 1902 to 1940. The library’s virtual exhibition presented the digitised books of bibliophile and patron Matas Strašunas (1817–1885) along with documents related to the founding of the library and its activity. 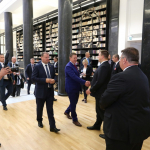 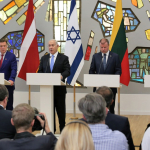 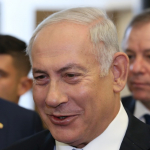 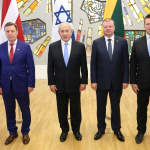 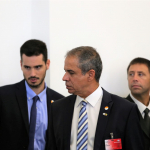 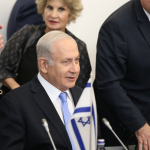 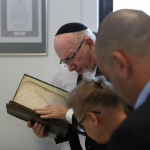 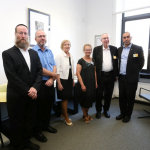