The National Library Consolidates Friendship with the Embassy of Spain

Martynas Mažvydas National Library of Lithuania held launch event for the book titled Spain, a Global History by Luis Francisco Martínez Montes, writer and diplomat. The book has been recently published in both Spanish and English. Among the event attendees was historian and writer Dr. Artūras Vasiliauskas. The event was facilitated by the Ambassador of the Kingdom of Spain to Lithuania, José María Robles Fraga.

In his address speech, José María Robles Fraga expressed his delight over the cooperation between Lithuanian cultural institutions and the Embassy of Spain which has intensified in recent years, the strengthening of cultural ties and exchanges, and the newly formed friendship with the National Library. According to him, this project presented to the public was the first (and certainly not last) joint effort encouraging people to seek points of contact between the two countries.

The author of the book, L. F. Martínez Montes, is a writer, diplomat and traveller. He previously served as a counsellor to the Permanent Mission of Spain to the Organisation for Security and Co-Operation in Europe (OSCE), and Deputy Head of Mission at the Spanish Embassy in Almaty, Kazakhstan. While posted in Central Asia, L. F. Martínez Montes developed an interest in the history of Inner Eurasia and has written and lectured extensively on the new actors and dynamics shaping the lands stretching from Moscow to Beijing. He has written numerous articles on U.S.-China relations, Spanish foreign policy and EU trends.

L. F. Martínez Montes’ book takes readers on a journey through the history of Spain spanning several centuries and introduces them to the diverse Hispanic culture scattered all over the world. In his book Spain, a Global History, the author explores how Spain and the Hispanic world have contributed to world history, its imprint across continents as well as its influences on various cultures and countries during different historical periods. The monograph focuses not only on the apogee of Spain’s power but also on the history of the country spanning across several centuries as well as the modern-day world. Both editions are amply illustrated with the photographs of various art works, buildings and prominent figures.

The imprint of Hispanic culture is clearly visible in modern-day Lithuania including passionate Flamenco featured at various events, performances of professional Spanish musicians, wide appreciation for the works of Spain’s literary giants (Miguel de Cervantes Saavedra, Federico García Lorca), and the links that the Jesuit Order established between the two countries dating back to the 16th century. On the other hand, the participants of the discussion noted that there are very few modern historical studies on Spain, its influences on Lithuanian culture, the development of the relations between the two countries and the Lithuanian diaspora in Spain. The studies on the relations between Lithuania and the countries in Southern Europe opens up a wide niche for new scholarly work and draws interest from researchers.

L. F. Martínez Montes said he was pleased with the newly formed friendship with Lithuania and Lithuanian public’s interest in Spanish history and culture. The author donated his books with dedications in both English and Spanish to the National Library. Readers can find and order the books on the National Library’s Online Catalogue. 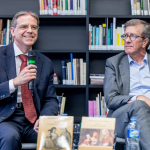 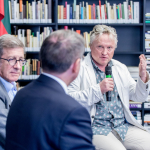 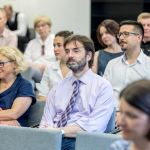 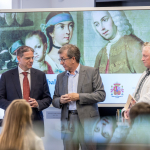