On 25–26 September, Martynas Mažvydas National Library of Lithuania will host an international academic conference aimed at investigating the World War II war crimes trials and their mediatization processes. It will be the first conference of this kind organised in Lithuania by the Branch Office of German Historical Institute Warsaw and Institute of Baltic Region History and Archaeology of Klaipėda University.

In this conference, participants will discuss widely known World War II war crimes trials such as the Nuremberg trials or the Eichmann trial and the lesser-known judicial proceedings held in Central and Eastern Europe. The discussions will also focus on war crimes trials that took place in Lithuania during the Soviet period and after the restoration of Lithuania’s independence.

The keynote speaker for the conference is a prominent American legal scholar Lawrence R. Douglas, Professor of Law, Jurisprudence and Social Thought. He is an author of numerous scholarly publications on World War II war crimes trials. In his latest book, he examines the trial proceedings of the Nazi war criminal John Demjanjuk which was held in Munich from 2009 to 2011.

Speakers at the conference will include scholars from Lithuania, Estonia, Poland, Germany, Austria, Italy, Hungary, Luxembourg, Romania and the United States. The opening of the conference will take place on 25 September at 9:00 a.m. Its intended audience includes not only historians, legal professionals or other scholars but also all visitors of the National Library who are interested in history. The event will be held in English. 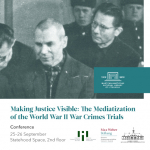